Nothing can stop us

I’m a bit shy about sharing this.  But recently, my very-nearly-seven-year-old son and I have developed this little routine for when we feel proud of ourselves and yet we need a bit of a boost.  Like before his swimming lesson. Or after another Portsmouth defeat.  (You can see why we’ve needed this in the last couple of months.)  Basically, you stand up, push your chin out, thump your chest with one fist, look up and say “Harry and Daddy!  Nothing can stop us!”  (Obviously if you try this yourself you’ll want to personalise the words.  Having said that, Harry and I will appreciate the third-party endorsement if you leave it as it is.)

Harry wasn’t with me yesterday when we launched EVERY ONE, Save the Children’s global campaign to stop children dying.  But I had quite a few chest-thumping moments. The day went like this…

At exactly midnight I heard the BBC World Service kick off their main news bulletin with this: “Save the Children have launched their biggest campaign ever…”  We weren’t in the news.  We WERE the news.

At 8am I was l live on the BBC myself talking about the campaign.  The interviewer finished by saying “Well if ever there were a worthy cause, this is it.  Good luck.” (He’ll probably get in trouble with the Beeb’s editorial policy guardians for that lapse into Being A Normal Human.)

At 9am on the way back to the office from Bush House I had nipped into McDonalds for a Sausage McMuffin (because I’m worth it…) when the press office called saying, go to TV Centre, the BBC want more.

At 10am my sister texted to say she’d seen our new ad on the tube.

At 1pm I was with about 200 colleagues back at Save the Children HQ to mark the launch of the campaign, doing a live link-up with Mumbai where our colleague from Save the Children India told us about the event they’d just done, where the actor and activist Shabana Azmi led an audience of supporters chanting ‘enough is enough!’  We all went one by one into the EVERY ONE photo booth and registered our message. Here’s mine: 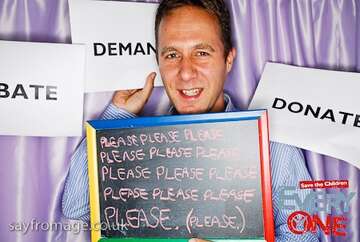 At 2pm I was reading off the list of other events that had happened so far around the world – Beijing, Berlin, Addis, Monrovia, Stockholm, Bamako, Yangon, Madrid, Abuja, Copenhagen and many more… our Ha Noi colleagues even managed to launch while simultaneously responding to the emergency in Vietnam.

It’s hard to describe the feeling on a day like this when all that you’ve been working for comes together.  There’s huge pride.  A little bit of surprise (I knew all the above was supposed to happen but you still never quite believe it will until it does).  And more than a little trepidation.  We’re out there, we have to DO it now.  We’ve set ourselves a pretty high bar to jump, and it wouldn’t be great to fail.  Hence the need for the Harry routine.

Later I went to Manchester for the Conservative party conference.  At each party conference we’ve been inviting delegates to add their thumbprints to our huge Make Your Mark petition which we’ve been running at music festivals through the summer after it started in Africa on the Day of the African Child back in June.

The first person to offer us their thumbprint managed to spill a glass of red wine over our lovely petition board.  That wasn’t quite the mark we wanted them to make.  Nobody suggested throwing white wine over the stain – it didn’t really seem appropriate somehow.

The Conservatives maintain there is a cross-party consensus on international aid and that they will match Labour’s promises.  We hope that’s true.  We’ll offer David Cameron a deal – you take care of the aid budget.  We’ll look after the cleaning bill.