Our movement's protection programmes help children who are in conflict, being exploited or neglected; 2.9m were reached in 2018.
Our safeguarding commitment

Whether a child is on the streets, moving across borders, in a refugee camp or an institution; whether they're at risk of child marriage, dangerous work or being recruited as a child soldier – we're there, finding new ways to reach children who need us most, no matter where they're growing up.

As well as working on the ground with vulnerable children, we're helping governments around the world strengthen their child protection systems and train social workers.

Together, we help every child become who they want to be. 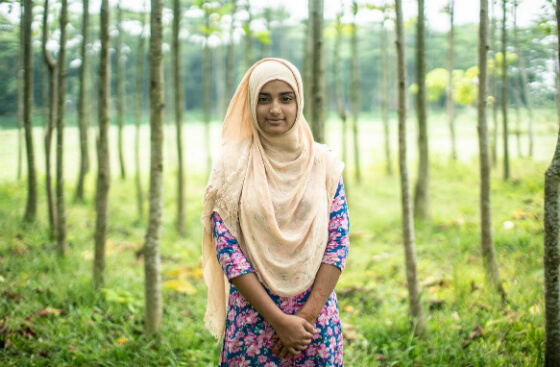 For girls forced into child marriage the consequences can be devastating: abuse or neglect from a husband they barely know, early, dangerous pregnancy, and the end of their education and any chance of building a future of their choosing.

That was the fate facing 15-year-old Shumi, whose parents wanted to marry her to man she had never met.

Shumi was against the marriage, and enlisted the support of Jasmin, a neighbour and Save the Children-trained peer leader who runs an advocacy group for girls in the village. Jasmin convinced Shumi’s family she didn’t need to be married and should complete her studies instead – now she’ll get that chance.

“I want to be successful in life,” says Shumi. “Now I’ll complete my education and become a good human being.”

Here's a few of the things we're doing;

Democratic Republic of Congo: Training local leaders to prevent and respond to exploitation and abuse of children.

Indonesia: Reconnecting families (Over 500k children are in orphanages, yet 90% have at least one parent living).

In our Child Friendly Space in Sindhupalchok, Nepal, seven-year-old Mina and her two sisters, listen to a teacher talk about child trafficking dangers. The Nepal Earthquake in 2015 took away lives, homes, and livelihoods, putting the children here in further jeopardy of trafficking.