Rishi Sunak’s Spending Review announced the intention to break a manifesto promise made just a year ago by reducing the UK aid budget to 0.5% of gross national income (GNI) in 2021-22. With the UK set to host both the G7 and the COP 26 climate summit next year, these cuts come at the worst possible time – not only for the world’s poorest people, but for a United Kingdom attempting to project itself as a ‘Global Britain’.

By analysing the most recently available data from the Foreign, Commonwealth and Development Office (FCDO), we’ve explored the likely implications of this cut. Depending how the economy recovers, this will lead to an aid budget of around £10bn - over £4bn lower than if the Conservative government maintained its manifesto commitment of spending 0.7% of national income on aid.

Whilst the potential £4bn cut to aid programmes is bad news for the world’s poorest and most vulnerable people at this time of global crisis, the other area of concern is that the majority of the £10bn has already been allotted. As shown by figure 1, £6.3bn of the FCDO budget for 2021-22 has been allocated to projects. This could be £7.3bn (£1bn more) once activities formerly under the remit of the Foreign and Commonwealth Office are included. This would leave only £2.7bn left, which would be reduced further once other departmental aid budgets are factored in.

There is set to be a significant shift in sectoral allocations for UK aid compared to 2019-20. As shown in figure 2, critical areas relevant to children such as health, education, and water and sanitation are set for large reductions of 20%, 33% and 22% respectively.

Although cuts are being made in many sectors, there are a select few with increased budget allocations for 2019-20. Figure 2 shows banking and financial services, energy, industry and mining, transport, trade policy, communications, and admin costs are all set to increase. This illustrates a clear change in the focus of the UK Government’s aid spending, leaving little space for the government’s manifesto pledges, such as girls' education. Education funding with gender equality as the main objective is currently set to reduce from £100mn in 2019-20 to £46mn in 2021-22, alongside a drop of 33% across the sector as a whole.

Figure 2 – Sector classification of budgetary allocations from of DFID’s former portfolio of activities, 2019-20 compared to 2021-22

The current budget allocated in 2021-22 continues to be focused at global and regional levels. Whilst several countries have increases in budget allocated to them compared to 2019-20 - such as India, Rwanda, Malawi, Kenya and Nepal - the majority of the UK’s priority countries are set for significant reductions in aid.

Figure 3 – Recipients of budgetary allocations from of DFID’s former portfolio of activities, 2019-20 compared to 2021-22

In the spending review, Rishi Sunak noted that the damage to the UK economy due to coronavirus is set to be ‘lasting’. However, unlike the UK, developing country governments across the world have not had - or been able to create - the fiscal space to be able to respond to the crisis. Within the 2021-22 financial year, developing country governments are set to continue to see constraints on revenue mobilisation and rising interest on debts. This will limit their ability to invest in critical services to deal with Covid-19 and the resultant impacts. Given this outlook, the cuts to the 2021-22 aid budget and the current reduction across many developing countries could not come at a worse time.

Figure 4 – Interest payments on debt are set to rise across many developing countries in 2021, constraining spending on children 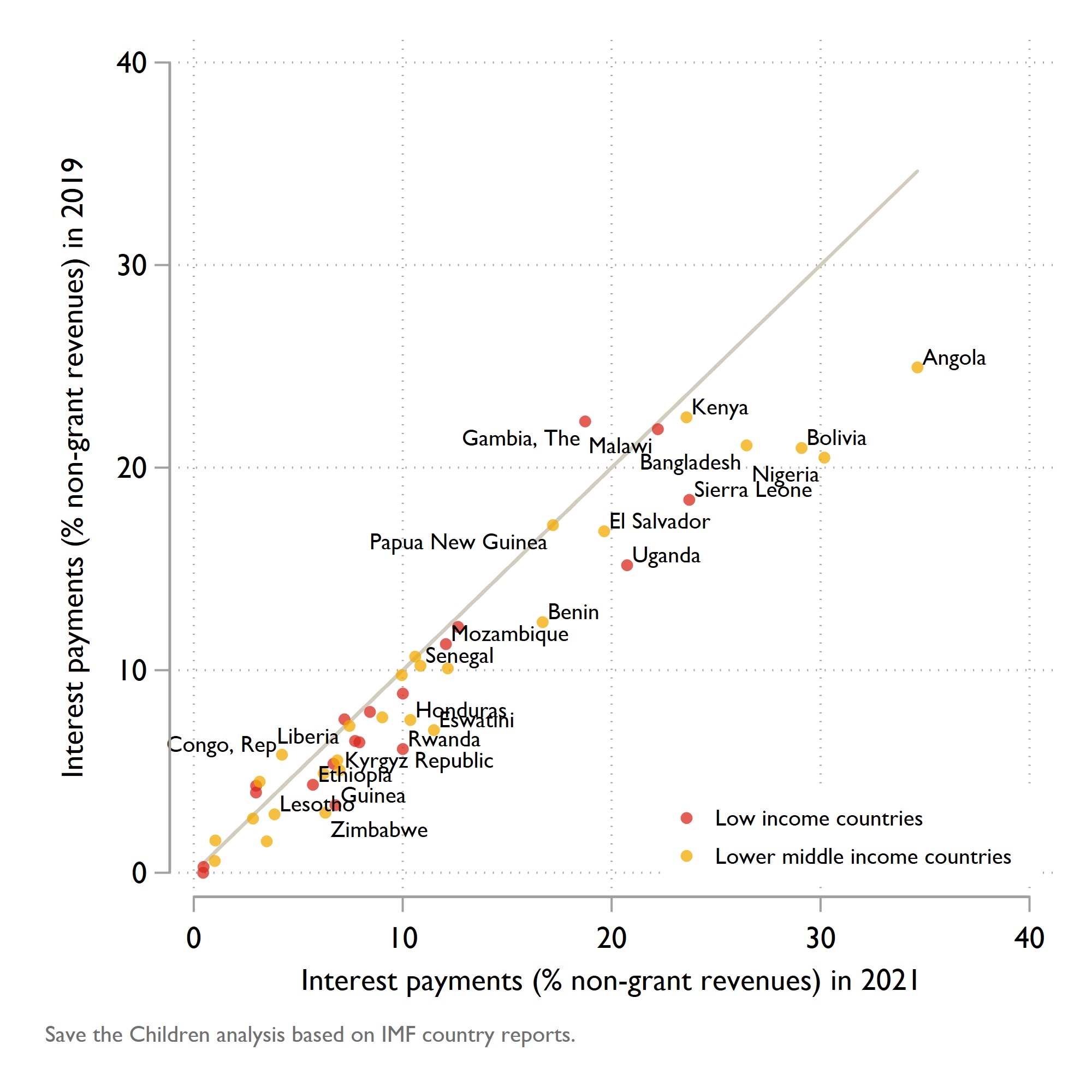 In addition, both this year and next, developing country governments are prioritising their budgets to protect spending on health, education, and social protection to deal with the crisis. Therefore, the re-prioritisation of the 2021-22 UK aid budget away from these sectors and others like water and sanitation is actively harmful, running counter to the priorities needed to protect the poorest and most vulnerable people at this time.

How to course correct…

For example, £4bn equals total domestic public spending on health across all low-incomes countries, serving 670 million people. The £4bn could also be used to catalyse additional financing, such as through the World Bank’s International Development Association, which would triple support to developing countries to £12bn at their time of greatest need. Alongside the critical needs for UK financing for the poorest children globally at this time, the cut will jeopardise the UK Government’s standing as it looks to gain global support for financing critical areas such as girls’ education though hosting the Global Partnership for Education summit and climate financing ahead of COP26. Whichever way you view the cuts to UK aid, the downsides far outweigh any small savings the Treasury will make. There needs to be a critical rethink of this decision.

Re-prioritise the current 2021-22 aid budget – today the UK Government has set out its seven global challenges where its aid can make the most difference. However, the current aid budget in 2021/22 is currently prioritising one of these over the other six, with a clear shift in focus towards trade and economic development. Whilst this may suit the interests of the UK Government, developing country governments need critical help as their fiscal space will remain constrained. Therefore, it is essential that in light of the cut to UK aid, the overall envelope and current prioritisation of activities is reviewed to ensure the government can deliver making a difference to the six other global changes and meet the needs - and rights - of the poorest people in the world.

The UK’s aid contribution is not just a signal of our values, it is a well-respected, world-leading package of programmes, expertise and evidence. We’re calling on Boris Johnson to review this decision and not risk the futures of the children who need strong healthcare, education and nutrition systems now more than ever.

Read more from our blog series on the Future of British Aid.