By Oliver Fiala (Save the Children) & Enrique Delamonica (UNICEF)

At the end of May, Save the Children and UNICEF presented estimates of children living in monetary-poor households and looked at various scenarios of how COVID-19 could impact them. Our analysis revealed that even before the pandemic hit, 586 million children – almost 1 in 3 children in low- and middle-income countries – were living in families who could not make ends meet.

New projections on the economic impact for 2020 now allow us to update our earlier estimates. Unfortunately, they show an even gloomier picture: without urgent action to protect families, the number of children living in monetary-poor households could soar between 90 to 117 million in 2020, with a middle estimate of 105 million. For the first time, we are also able to look ahead to 2021, and while this comes with significant uncertainty, it suggests that this year’s increase in numbers is mostly here to stay. 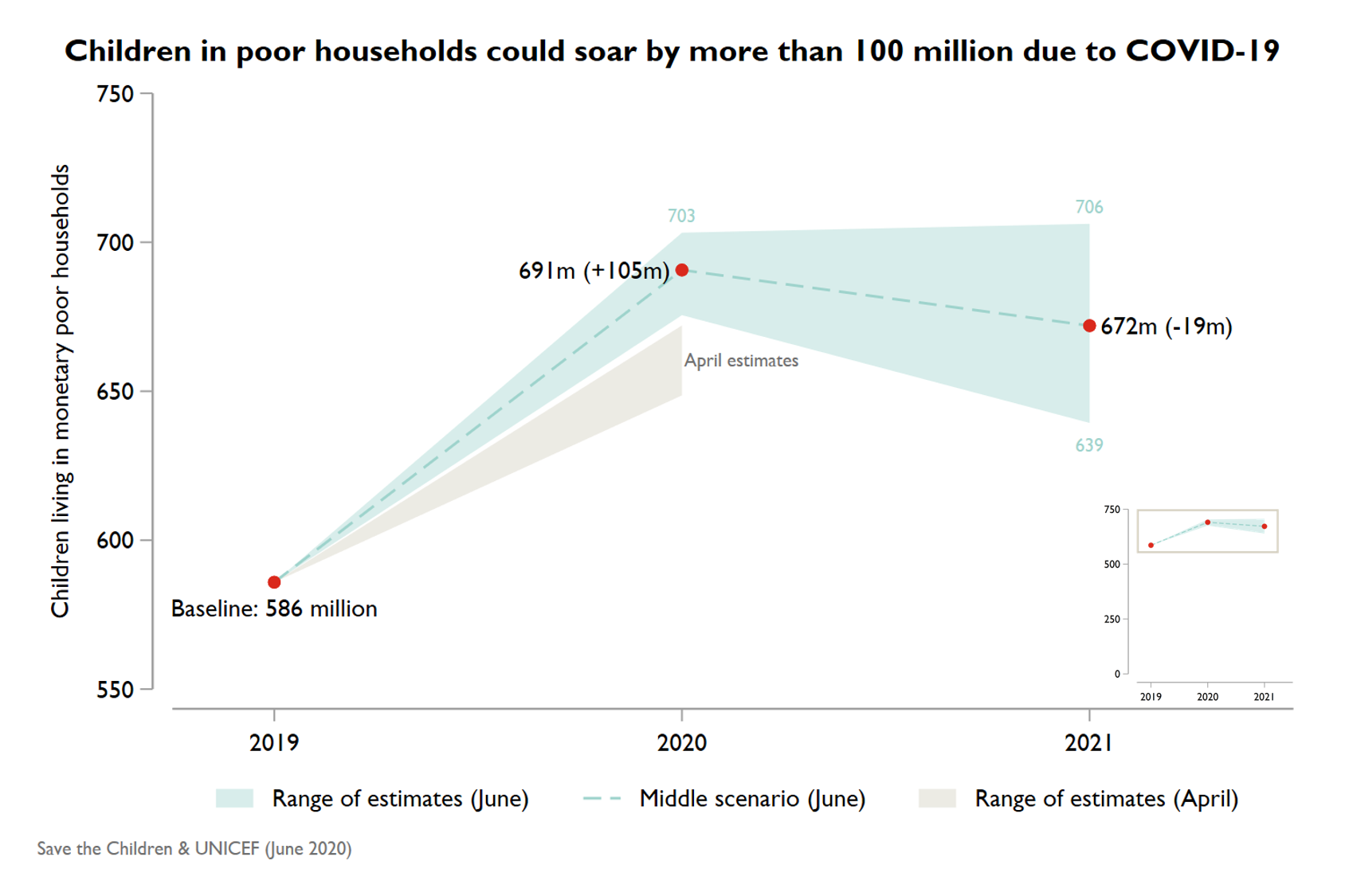 Children suffer poverty differently from adults. And while our analysis contributes some important insights on the financial challenges faced by families and, consequently, by children, we also need to measure child poverty by directly looking at the satisfaction of their rights across a range of dimensions.

2020 even worse than expected

As we have explained in our previous blog and, in more detail, in our technical note, our estimates on the potential effect of COVID-19 on monetary poverty rest on two effects:

While we don’t have any new information on the potential distribution effect (and won’t have any COVID-specific insights any time soon), new economic projections by the World Bank and the IMF will directly impact our income effect. Earlier this month, the World Bank has published its June update of the Global Economic Prospects, which point to a 5.2% contraction in global GDP in 2020, the deepest global recession in eight decades. A few days ago the IMF updated its World Economic Outlook, which shows a similar effect. While both come with a higher-than-usual degree of uncertainty, they provide new country-by-country estimates, which are significantly worse than those published in April (which were the basis for our original estimates).

Last month, we estimated between 60 and 86 million additional children living in monetary-poor households. Given the revised growth projections, we now expect around 90-117 million. Under the most pessimistic scenario (upper bound), this number could reach 117 million (assuming the worst GDP projection and a significant change in the underlying income distribution for each country); under the most optimistic scenario (best GDP projections and milder distribution effect) we would still expect an increase of 90 million. This could be summarised in a middle scenario of 105 million additional children in poor households compared to the pre-COVID baseline.

As usual, prospects for different world regions vary. We are expecting the largest absolute increases in South Asia and Sub-Saharan Africa, while it is in Europe and Central Asia as well as Latin America and the Caribbean where we might see the largest changes in the prevalence rate. 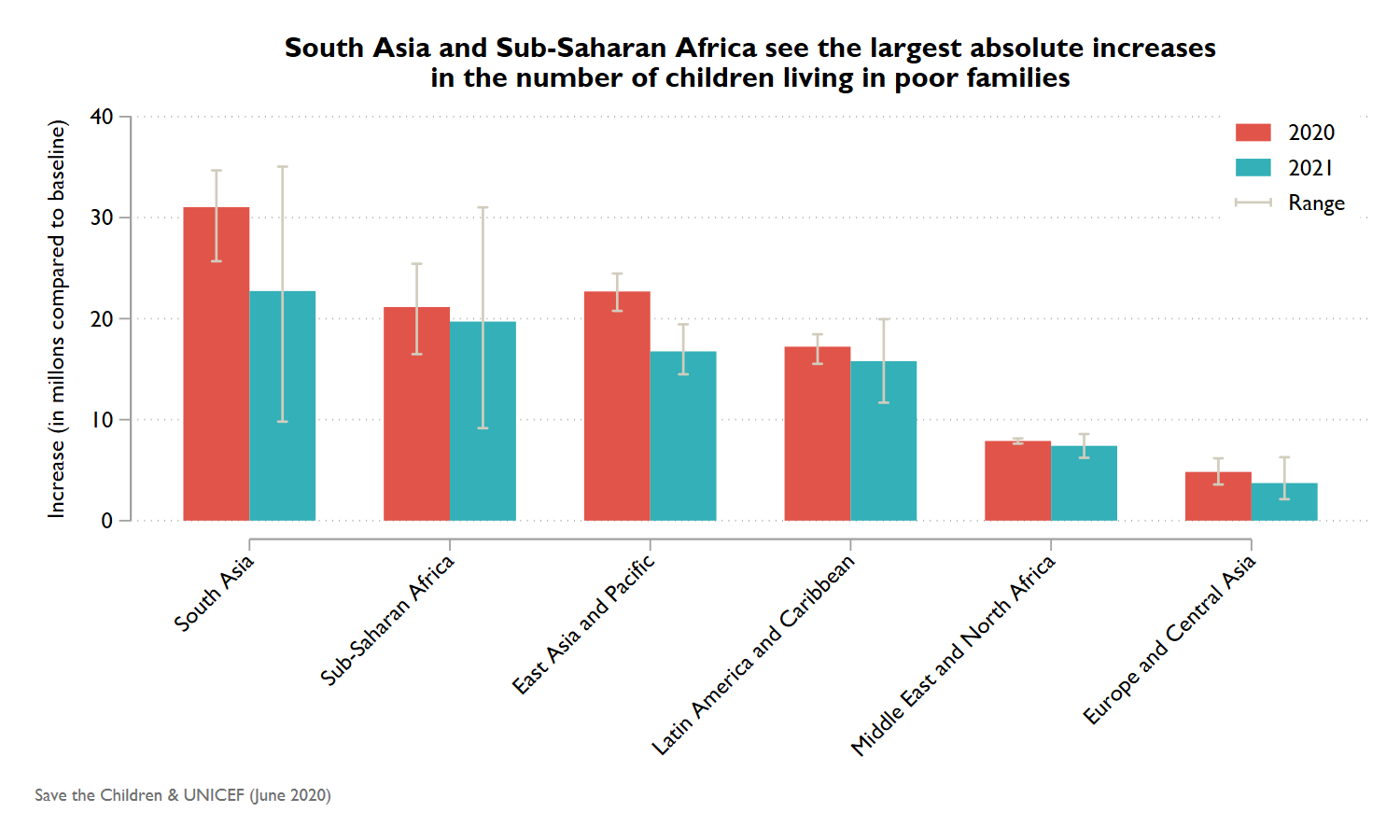 The various economic outlooks also provide economic projections for 2021, pointing to a slight recovery of the world economy. For the first time, we extended our model to next year to estimate the consequences this may have on children living in monetary-poor families. The three scenarios for 2021 – middle scenario, as well as lower and upper bound – are a continuation of the equivalent estimates in 2020 and are based on path dependency. Furthermore, the upper bound estimate assumes an even less egalitarian income distribution (although to a smaller extent than in 2020) and the lowest GDP projection for next year. In contrast, the lower bound estimate assumes a slightly more egalitarian income distribution (although not significant enough to reverse the 2020 effect) and the most optimistic GDP projection. The likely outcome in 2021 will probably be somewhere in between and the estimates come with a large degree of uncertainty (as the graph earlier shows clearly). However, with GDP projections only showing a modest recovery in many countries (and even this might still be too positive) and increasing child populations, we do not expect to see the number of children in monetary-poor families decrease to pre-crisis level anytime soon. Even in the best-case scenario, we expect a reduction in 2021, which is less than half the increase in 2020.

The estimates above can be avoided – these  are projections in the absence of policies to reduce the impact. Governments have a range of policy options to mitigate the shock of the pandemic on families and children. They range from widening social protection (both in cash - like child benefits - and in kind - like providing meals to children who can no longer access school feeding) through to paid leave, childcare subsidies, and other ways to help families and sustain parents’ jobs and earnings.