Investing in the future: The importance of domestic resources and the role of aid in the financing of health system

Recent data from the World Health Organisation confirms what many have suspected for some time: governments in low-income countries are spending even less on health than previously recorded and aid may have a ‘crowding-out effect’ in the health sector – governments moving domestic money, such as tax, away from the health budget as they receive more aid. This is explained further in our new briefing paper: The importance of domestic resources and the role of aid in the financing of health systems in low-income countries in providing essential health services for all.

We know that aid from the UK and other governments plays a vital role in supporting countries to save lives and improve the health of their people. But we also know that governments need to raise and invest their own resources to have long-term and large-scale sustainable change. These recent findings are incredibly important – particularly in the context of a recent promise by the new Secretary of State for International Development, Penny Mourdant, that UK Aid will no longer be invested when “others should put their hands in their pocket”.

The new data shows how much government health expenditure is from domestic resources (e.g. tax) and how much is from external sources (aid). The news is that governments in low-income countries are spending less domestic resources as a share of GDP on their health systems than a decade ago – 1.69% in 2006 to 1.44% in 2015 – with aid playing a bigger role. Following a sharp decrease from 2006-2009 there have been modest improvements in government spending from tax and other domestic sources, but all low-income countries are well below the recommended minimum 5% GDP domestic government spend required to deliver basic health services. This is despite governments spending 50% more per person on health during the same period.

How is this possible?

During the same period, most low-income countries have experienced economic growth creating increased fiscal space (additional money) to spend; it just hasn’t been spent on health at the increased rate that was expected, or that was needed. There are many reasons for this – competing priorities, natural disasters, war, and financial mismanagement – and one further reason that may need discussion by all of us in the aid community: this latest data (figure 1.) suggests that donor support to countries may crowd out domestic resources in governments’ budgets. 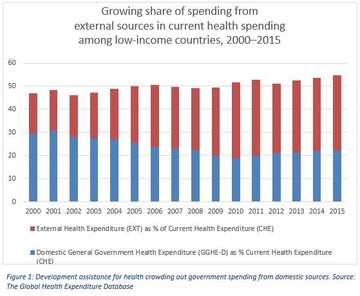 If increased development assistance for health is actually the cause of decreased domestic public spending it would be in part because of the fungibility of external funds, such as aid in low-income countries. There is evidence that governments reallocate domestic finance away from the health sector, towards other priorities that donors are not supporting, but this means little overall additional gain – and domestic public health spending stagnates. It also means that flexible national resources are replaced by restricted grants for specific purposes, making building UHC harder.

What does this mean for donors?

Does this mean that donors should stop aid for health systems in countries most in need? Certainly not. What it means is that donors must find new ways to work with governments to encourage the raising and allocation of adequate domestic public resources to health. This money should be properly managed and safeguarded, and budgets should be needs-based and open to regular scrutiny – something that Save the Children does in several countries such as Indonesia and Kenya.

A priority for donors must be supporting the development of credible financing strategies to achieve universal health coverage, which contain concrete and measurable steps to increase national resources for health including concrete changes within current parliamentary terms – and the establishment of required finance structures.

The UK could place measurable progress toward spending at least 5% of GDP on health – a recognised amount necessary for governments to provide essential health services for all – at the core of engagement with aid recipient countries. The UK might prioritise its support for countries where even that 5% still cannot reach a minimum of $86 per capita annual health expenditure, and encourage other donors to adopt this approach too. This is something Save the Children suggested be explored in October last year. It is important to make clear that any shift or reprioritisation in donor approach should not disrupt or come at the detriment of existing donor supported activities. As well as engaging directly with countries, if the UK government is serious about UHC then it needs to demonstrate commitment to the global UHC movement and engage in the debate through support for global platforms such UHC2030.

Movement towards sustainable domestic resources collected by governments, pooled and allocated on the basis of need, is urgently needed in many countries, not least in those farthest from universal health coverage. Where public finance is absent, patients have to pay for treatments themselves, directly from their own pockets. This can push households into or further into poverty, or prevent the sick and injured from seeking care at all. The recent universal health coverage (UHC) monitoring report reported that half of the world’s population still don’t have access to essential health services, and the number of people who spend a quarter of their household budget on health has increased by 5%, to 180 million. The longer that inadequate and regressive health financing in the poorest countries is not seriously addressed the further we are from health for all.

The result of this lack of investment in health systems and the barriers it creates for the most vulnerable is stark. Two children are dying every minute from pneumonia, an entirely preventable and treatable disease. Many of these children are dying because their parents and carers to not have access to affordable health care – and even when they do, health facilities do not have the most basic equipment and medicine, such as oxygen. Of the 30 countries with the highest burden, only one is anywhere near the 5% target and most are spending well under $30 per capita on their health system, falling to just $7 in DRC – combined domestic government spending and on-budget DAH.

Pneumonia is now the leading infectious killer of children, which is why Save the Children is taking it on. One critical solution is for countries to properly finance health systems, and allocate that money to build functioning and far reaching primary healthcare systems so that children suspected of pneumonia, as with any other disease, can be easily taken to a nearby health facility and treated; preventable deaths from pneumonia are a critical indicator of the equity and quality of a country’s health system.

If donors are serious about helping countries stand on their own two feet there are three things they must do: