Fill a Truck Day 3: Driving deep into the desert

We woke up in the town of Garissa early enough to see the morning sky turn from purple to white. A new day on the life-saving truck’s journey.

Garissa is the last town on the highway before the tarmac ends. It’s a burgeoning economic hub that marks the end of part of the country, and the beginning of another.

Behind us is the long ribbon of highway we’ve travelled, from the buzz and bustle of Nairobi. Beyond it lies the silence of the desert – an entire region of parched land, buckling under the increasing pressure of drought.

While the truck crew took some tea and bread in a small roadside café, we peered out at a flat, dusty horizon. Even at this early hour, we could feel the sun making its first threatening advances as we looked out at our route. We figured we had another six to seven hours of travel ahead of us.

By the mid-morning we’d already been humming for several hours up into the North Eastern Province. By noon I could feel the heat actively pulling moisture out of my body.

Still, we kept driving, sometimes following behind the truck as it kicked up great clouds of dust into us, and other times cruising ahead of it.

At one point around noon, the distance between us and the truck became too great and we realised we needed to stop so as not to lose sight of them. We pulled over in a shallow bank of sand to wait for them to catch up.

Within a minute we were surrounded by a crowd of curious onlookers – sickly donkeys, a dozen of them had wandered over to us with their ribs sticking out and their eyes glazed over black and glassy. 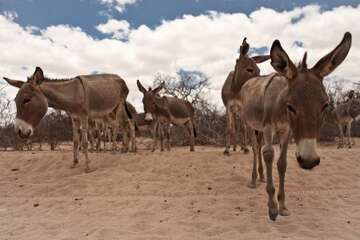 Even without words it was plain to see what they were after. Water. It was clear they hadn’t had anything to drink in days. They staggered around us as if we might be able to offer them something but nothing materialised. They eventually lost interest and wandered off.

A group of children soon appeared several hundred metres down the road and kept an inquisitive distance as they inspected us with a mix of curiousity and fear. I stepped out for a bit to take some pictures but immediately felt the sharp attack of the midday desert sun. I hadn’t been drinking enough water and my mouth was dry. 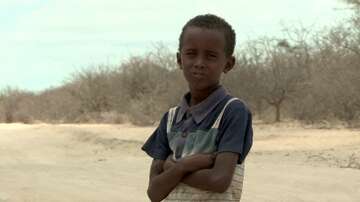 I looked into the viewfinder of my camera but all I couId could see was black, my eyes couldn’t make the adjustment between the blinding sheets of white light that surrounded me and the hazy dark figures drifting lazily through the glass layers of my lens. I had to satisfy myself with guessing what pictures I was taking.

It’s one thing to be a tourist in this area, a visiting worker carrying out a plan during a brief visit. But what is it to live here?

With no money, with dying livestock that were supposed to ensure your continued survival, hours to walk for water, no markets to buy fresh foods, and a near absence of viable medical facilities – how does one carry on?

What does a mother think to see her children grow thinner and thinner and become sick? What does a father do when all his resources and reserves are depleted and he has mouths to feed? What does a child know other than heat, and thirst, and hunger here?

I try to have all these thoughts and project some sort of empathy, imagine some sort of understanding, but it’s all too much at the moment and I can’t think straight with the noise of the sun burning in my ears. I headed back into the sanctuary of the vehicle, and the shade it provided to sit and wait out the heat until the truck arrived.

Several hours later we were driving side by side with the truck on parallel sandy tracks that led through a forest of dead trees – stretching up like withered limbs, all grown thin and wispy after years drought.

When we cleared the forest, the truck carrying the cargo of food aid veered off away from us and headed again into the distance. At certain points like this in the journey, the landscape was clear and flat enough to provide us with that mythical desert image: a virtual lake shimmering just below the horizon.

We headed after the truck and in the direction of that lake, but it always disappeared before we could reach it.

No matter, within minutes we would be in Habaswein and this penultimate stage of the journey would reach its end.