Fill a Truck Day 1: Loading up and leaving Nairobi

Nairobi airport: after spending several hours on the tarmac filming the arrival of several tons of relief food, I spent yesterday afternoon at a loading facility in the Nairobi industrial zone to follow this food through the next stage of its journey.

A truckload of life-saving food 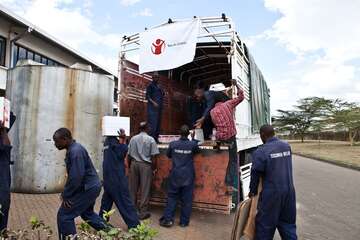 We arrived towards the end of a sunny day in the east African capital to find the shipment of high-nutrient peanut paste taking up an entire store room at the loading facility. Within minutes of our arrival, the foreman of the warehouse gave the order of “Twende!” (let’s go) to the several dozen workers decked out in navy jumpsuits, and the two dozen men quickly got to work moving the boxes of food from the warehouse onto the flatbed of a Save the Children lorry. 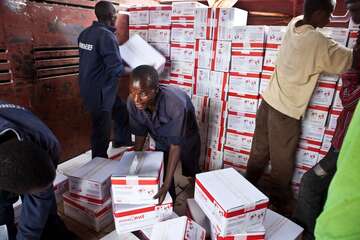 After an hour of loading, the lorry was filled to capacity and I jumped up into the cab with the driver, a rotund man named Ali Saddam Hussein who is originally from the north-eastern border town of El Wak, which is far up into the deserts of Kenya that border Somalia.

By now it was about 5pm and we knew we’d have to swim through the currents of Nairobi rush-hour traffic, across the city, and to the Save the Children office. There, the lorry would spend the night before beginning the two-day journey up to north-eastern province, where the relief food would be delivered to children affected by the food crisis.

The long journey to save children’s lives 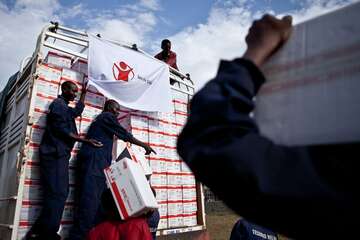 For several hours, Ali maneuvered our shipment through the teeming highways of Nairobi as scores of commuters, pedestrians, public service vehicles and lorries all tried to fight their way through the twisted knots of evening traffic. By the time we arrived at the Save the Children office it was dark and we decided to call it a night.

This morning, we’re up early, ready to begin the next stage of the journey: a long haul from Nairobi up across the rugged brushlands of Eastern Province until we reach the desert outpost of Garissa the last town on the highway before the tarmac ends, and the desert begins.