We Want To Reach Every Last Child

19.9 million children under one-year-old are missing out on immunisation.

Despite incredible progress, 1 in 7 children around the world miss out on life-saving vaccinations. We’ve been fighting to achieve universal immunisation coverage for children, working around the world to try and give all children a healthy start in life.

While 85% of children around the world now receive the most basic vaccines, such as pneumonia, measles and hepatitis B, many are still left behind. Two-thirds of children living in a country affected by conflict are not immunised.

Children from marginalised groups are more likely to be denied access to immunisation – 400 million children are at risk of being excluded, simply because they belong to a certain ethnic, religious or indigenous group, or because they’ve been affected by migration and are on the move.

The fact that these children are being left behind is no accident. Sadly, it’s the result of neglectful policies and programmes, which fail to prioritise certain children and the communities in which they live.

It’s one of the most cost-effective ways we have of preventing illness, with an economic return of around £12 for every £1 invested. When used effectively, immunisation can help to prevent millions of deaths – between 1990 and 2017, preventable child deaths decreased by 60%, from 12.7 million to 5.4 million.

How we helped Esther* 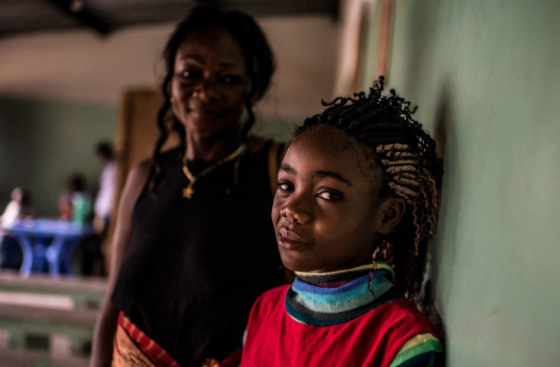 Esther, 11, has come to get her Yellow fever vaccination at one of the 102 vaccination sites in Binza Ozone, Kinshasa. Her mother Dongo brought her to get vaccinated. Esther told us she wasn't scared to be vaccinated, but hid behind her hands when said it.

Esther and her mother are glad to be vaccinated so that they will stay healthy.

Esther says: "We live close to this health centre, on the other side of the road. It wasn't far to come here."

"I am not scared to get vaccinated or maybe a little. I have been vaccinated before, against Measles. This is my second time to be vaccinated. I am glad I'm getting vaccinated, because then I will be protected. I'd be scared if I didn't get vaccinated."

As Gavi Alliance partners come together on 10th-11th December 2018 for the Gavi mid-term review meeting, this is a critical moment to assess progress and prioritise action. Save the Children’s new briefing, Measuring progress on the pathway to universal immunisation coverage, explores progress and required action in a number of areas, including ensuring immunisation is in reach of all children, sustaining and growing immunisation programmes following transition from Gavi support, and vaccine affordability.

It makes recommendations for issues that must be prioritised by the Gavi Alliance (including governments, partners and the wider immunisation community) for the remainder of the current strategy and that should be an even stronger focus in the next strategic period. Our Immunisation Scorecard looks at various indicators to assess countries’ progress, as well as progress across different vaccines.

• Measuring progress on the pathway to universal immunisation coverage

The right vaccines and equipment

It’s crucial that the correct vaccines, and the equipment used to store them, are made available to everyone, especially in rural and remote areas.

While governments are paying towards research and development (R&D) to help, it’s not doing enough to ensure that the right vaccination products are available to everyone, including children, in low-income countries.

The companies making the vaccines have a key role to play, but there’s also a need for more public investment and better systems in place that will work harder for countries with fewer resources.

Success can happen. We’ve seen it with the MenAfriVac® vaccine. This provides a low-cost, tailor-made vaccine against meningitis A, and was developed specifically for sub-Saharan Africa.

We're fighting the battle against pneumonia, the world's deadliest disease.

Vaccines play an incredibly important role in this fight.

Progress has already been made in getting pneumonia vaccines to children in some of the world’s poorest countries – thanks to the support of the UK and other wealthy countries.

But there’s still a long way to go: pneumonia vaccines simply aren’t available to many of the children who need them most.

That includes many children in middle-income countries with poor populations. These countries must pay higher prices for the vaccines – but we need to make sure they invest in the vaccines and their delivery.

The UK government, alongside the global community, must help make sure there are more vaccine suppliers so that prices fall, and the countries that need them, can afford them.

Find out more about how we're tackling pneumonia here.