Today the Chancellor of the Exchequer, Rishi Sunak, will present to Parliament his Autumn budget and Spending Review, which will set out the government‘s budget for the next financial year (April 2022 to March 2023) and departmental resources up to 2024-25. Whilst much of his statement to Parliament, and the 100+ page document, will focus predominantly on the UK economy and domestic spending, a small part will look at government spending internationally. Most crucially for the world’s poorest children, it will signal the government’s intention for its aid budget up until the next general election.

A year ago in the 2020 Spending Review, the government announced its intention to make a temporary cut to UK aid from 0.7% of gross national income (GNI) to 0.5% until the ‘fiscal situation allows’ a return. After much debate on when this would happen, in July the government proposed a framework for returning to 0.7%, which won backing in a parliamentary vote. The fiscal conditions laid out in the framework mean that there will almost certainly be no return to 0.7% before 2024-25.

With clarity on UK aid spending already established, you may wonder why the 2021 Spending Review is of such crucial importance? The issue is that alongside the government's move to spend less on aid, they have signalled their intent to significantly increase aid spending in areas that have little or no impact on its fiscal position (e.g. not funded by tax receipts or lending). This includes reallocating its international reserve assets (called Special Drawing Rights – SDRs) held within the International Monetary Fund (IMF); donating unused COVID vaccines; and providing debt relief to Sudan (stemming from a loan in the 1980s, and called a ‘fictious debt’, as it is almost all interest accrued over time). Figure 1 shows that these three areas combined could account for almost $4bn in aid spending over the next 4 years, most notably next year when it would account for 14% of an aid budget held at 0.5% of GNI (although this could change, as the government has said yesterday’s coup in Sudan may put a halt to debt relief).

Figure 1 – COVID vaccine sharing, Sudanese debt relief and use of SDRs would form a significant proportion of UK aid

See end for source and notes

These additional spending items have been dubbed a ‘stealth raid’ on UK aid by charities and research organisations, as although they are countable as aid, fitting them into the 0.5% budget will likely come of the expense of vital aid spending relevant to children, such as on education, health and humanitarian assistance. Figure 2 shows that adding these into aid already budgeted for next year would already require £13 billion, when 0.5% of GNI is set to only be around £12 billion. This baseline budget for what is needed will likely grow beyond £13 billion, as it does not yet include spending linked to the government’s commitment on climate finance and the Global Partnership for Education. The government therefore faces a major decision: either maintain its strict adherence to spending 0.5% on aid that will inevitably force further cuts to existing programmes, or count these new additional spending items outside of the 0.5% GNI, given that they will have no material difference on the government’s fiscal position. This should be a decision easy to make, as the latter option would prevent further cuts to critical aid programmes that are transforming the lives of some of the poorest children across the world. 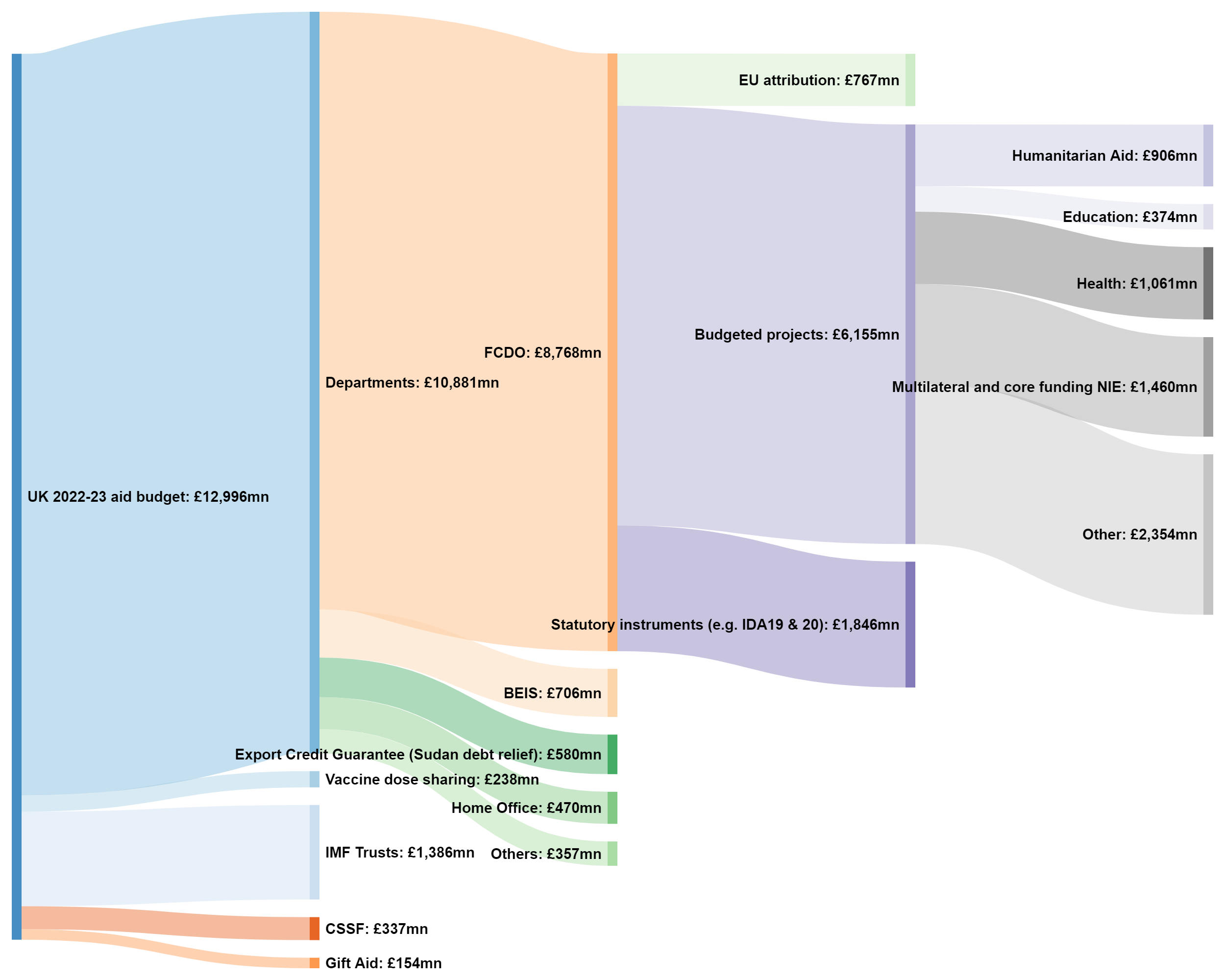 See end for source and notes

The Spending Review will likely provide limited detail on the plans for UK aid, but should provide insights into whether the government is planning further cuts to existing programmes and commitments. For example, if Rishi Sunak announces an aid budget of around £12bn next year, without a qualification of things like SDRs, vaccines and debt relief that will be in addition to it, it is a sign that 0.5% will be strictly adhered to up to 2024-25 and significant cuts are coming. The easiest cuts to make would be on things like humanitarian assistance, where funding can be more flexibly changed but where the impacts would be most keenly felt by vulnerable children living in some of the harshest conditions on earth. Conversely, the 2021 spending review could signal that the government is willing to go beyond 0.5% by counting contributions via debt relief, dose sharing and SDR reallocation as additional.

So, over to you Chancellor…

Notes: COVID vaccines sharing - based on the 100 million doses committed, costed at $6.72 each, with an estimated 50% delivered by end of 2021 financial year and 50% in the 2022 financial year. Debt relief to Sudan – HIPC debt relief assumed to come in the 2022 financial year given the aid budgets for this year have been finalised, and debt relief beyond HIPC at estimated completion point in July 2024 falls in the 2024 financial year. SDR recycling through IMF trusts – Based on IMF requested financing for PRGT and proportion of G7 burden share to the UK, which was replicated for RST calculations. SDR lending to ODA estimated based on 30% figure through PRGT and increased to 50% for RST given the longer term lending envisaged. RST recycling estimated to start in 2022 financial year when IMF hopes to have it operational. Whilst there may be other ways to recycle SDRs, this analysis focuses just on use within IMF trusts, given these are main tangible ways thought possible at present.

Notes: EU Attribution – based on the £2.9bn left to disburse within the EU Development Fund, and EU RAL budget estimates from the Office of budget responsibility March 2021, as a proportion of EU budget spending on aid in 2020; IDA – IDA 19 funding based on IATI submission by FCDO, and IDA 20 estimated based on UK’s proportional burden share. IDA 20 funding could start to be disbursed in the following financial year; FCDO budget projects – based on current budgeted activities detailed on IATI, expect humanitarian aid, which is estimated at same funding as this financing year; All other department spend, CSSF and gift aid based on funding this year; IMF Trusts – this includes both the aid through SDRs use and grant funding of £600mn estimate to be needed from the UK’s burden share for both PRGT and RST to operate.