Eglantyne Jebb: the woman who saved the children

Eglantyne Jebb’s award-winning biographer, Clare Mulley, blogs about the woman and the work that inspired her, in Save the Children’s centenary year…

100 years and one day since Eglantyne Jebb and her sister Dorothy Buxton launched Save the Children at a packed public meeting at the Royal Albert Hall, I was very moved to see a new bronze bust of Eglantyne unveiled at the same venue. You can see a short film of the event here. The sculpture was created by the award-winning artist Ian Wolter who donated his time and work for free, mainly because he is a long-standing supporter of the Fund, but also because he is my husband. The cost of the bronze was generously sponsored by Save the Children’s former Chairman, Peter Bennett-Jones, and broadcaster and ambassador for the Fund, Natasha Kaplinsky, kindly did the actual unveiling.

Eglantyne and Dorothy had arrived at the same hall a century earlier, when the trees across the road were rather shorter and there was less traffic pollution on the building’s beautiful façade. The sisters did, however, have to face some fairly hostile elements among the crowd that had gathered that day. Some had even brought rotten fruit and vegetables to throw at the ‘traitor sisters’ who wanted to ‘give succour to the enemy.’ Eglantyne silenced them all as she called out, ‘Surely it is impossible for us as normal human beings, to watch children starve to death, without making an effort to save them?’ Potatoes went back into bags, purses came out, and a spontaneous collection was taken up around the hall.

Fortunately, a century later, Save the Children’s CEO Kevin Watkins, and Craig Hassall, CEO of the Royal Albert Hall, had left their rotten veg at home, as had the Fund’s trustees, many committed volunteers and supporters, and quite a few members of the Jebb and Buxton families who joined us.

As her biographer, I was delighted to open the event with the story of Eglantyne’s arrest in Trafalgar Square, the brilliant defence she mounted at her Mansion House court case, and her and Dorothy’s ambitious initiative to capitalise on the blaze of publicity that followed the trial by launching the Fund a few days later. Just before I stepped up to the mic, a lady who looked vaguely familiar introduced herself.

I first met Amanda Richards when I worked at Save the Children in the corporate fundraising team, over twenty years ago. Amanda was one of three guests to join me on the Fund’s first ever programme visit for major corporate supporters. In 1998, we travelled together for two weeks in India.

Our first stop was to see the mobile crèche set up by the Save the Children for the children of female construction workers on the building site of an international hotel. This was a pilot scheme and, seeing the many benefits to both child welfare and worker productivity, it was soon paid for by the construction company and extended to all their sites, before becoming standard industry practice. 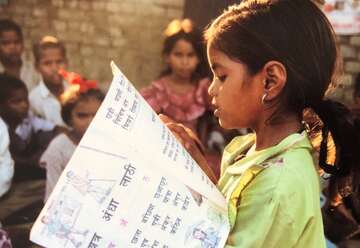 While we were joining in with some craft activity at the crèche, one of the children gave me a card she had made with a drawing of a flower. When Amanda left a week later, having seen a range of projects looking at child health, education through night schools, the supply of safe water, and a women’s collective making clothes, she took the card with her. Inside I had written a note for another Save the Children business supporter, a man who she would be meeting back in London. I don’t think I had seen Amanda again since then. She is now a Vice President of the Fund, among other activities acting as long-standing chair of the ‘Summer in the City’ ball that annually raises around £200,000.

A couple of weeks after the Royal Albert Hall event, Amanda and I arranged to meet again. Now she told me that her visit to India had stayed in her heart, and on her mind, ever since. She had expected to be moved and impressed, but she had not anticipated the impact of the work being either so wide or so deep. Staff explained how cycles of social exploitation and deprivation had been broken; companies had permanently changed their business models to align with children’s rights; and children had told her that they hoped to become teachers, doctors and even development workers!

Amanda had since read my biography of Eglantyne, The Woman Who Saved the Children, and I was delighted to sign some copies of the book that had been donated for guests at her centenary summer fundraising event. She was thrilled in turn that all the book’s royalties are donated to the Fund, so that every copy raises money as well as awareness.

When the book was republished this year, to mark the centenary, the arrest and trial chapters inspired scriptwriter and Save the Children supporter Charlotte Bogard McLeod to write a short play. This was then performed with Joely Richardson as Eglantyne, and Helena Bonham Carter as the judge, at Save the Children’s centenary gala in London’s Roundhouse. During rehearsals both actresses told me how inspired they were by Eglantyne, and how they hoped this play might go further… fingers crossed everyone please!

Other Eglantyne events this year have included a series of talks in and around Ellesmere in Shropshire, a town which now has new street signs welcoming people to ‘The Birthplace of Eglantyne Jebb’, and an event at Cambridge University where I spoke with Dr Peta Dunstan whose biography of Eglantyne’s sister Dorothy, Campaigning for Life, has just been published. There has also been a new blue plaque to Eglantyne put up in Marlborough, where she once taught in the local school, and Anne Chamberlain has performed her excellent one-woman show, Eglantyne, all round Britain and in Switzerland, Lebanon and Tanzania! 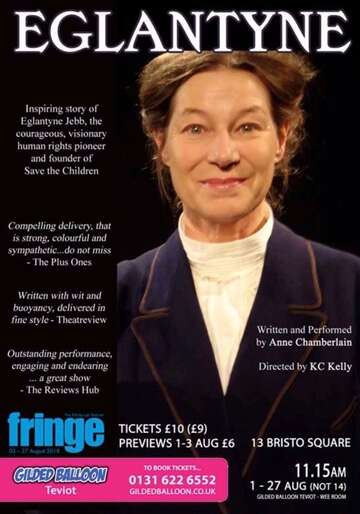 Flier for Anne Chamberlain’s one-woman play Eglantyne..Back home I have been interviewed about Eglantyne for national and regional press, for BBC TV World News, and on the BBC Radio 4 PM programme with Evan Davis. I’ve recorded podcasts for the Spectator and Dan Snow’s History Hit; and spoken at countless history and literary festivals and other events. ‘We have to devise means of making known the facts in such a way as to touch the imagination of the world,’ Eglantyne once said, not knowing what an impact her own life story might have.

The Woman Who Saved the Children has now been translated into Spanish and Korean, and recently I was pleased to talk about Eglantyne to members of the International Save the Children Alliance at their centenary conference in Lady Margaret Hall – Eglantyne’s own former Oxford college. This is where the bronze bust of her now lives, where it has already inspired plans for an annual Eglantyne Jebb lecture. Meanwhile a plaster edition of the bust, with a bronze patina, has been given a permanent home in Save the Children UK’s Farringdon head office, where everyone can see her.

Finally, following my introduction to the Jebb family, this autumn the National Portrait Gallery will be including an original image of Eglantyne in the national collection. Perhaps it might be this one, below, showing her striding into action, apparently not noticing that her shoe-laces are undone and she is losing papers from her file. This is my favourite of all Eglantyne’s scratchy self-portraits, although I also very much love a set showing show her frightening a herd of sheep as she falls off her bicycle before getting back on again with true blue-stocking determination…

These updates were all very good, but what Amanda wanted to know was what happened to the lovely corporate supporter to whom she had brought my flower-card from India. Readers, I married him… Watch out people, it is amazing how much the story of one brilliant, courageous, passionate and compassionate woman, can change your life!

Clare Mulley’s first book, The Woman Who Saved the Children, won the Daily Mail Biographers’ Club Prize. The Spy Who Loved, now optioned by Universal Studios, led to Clare being decorated with Poland’s national honour, the Bene Merito. Clare’s third book, The Women Who Flew for Hitler, tells the extraordinary story of two women at the heart of Nazi Germany, whose choices put them on opposite sides of history. www.claremulley.com

Text and photos copyright Clare Mulley, with the exception of Eglantyne Jebb’s self-portrait and the Royal Albert Hall in 1919, which belong to the Jebb family and Save the Children.