Last week Save the Children supporters helped transform the lives of a group of British children caught up in horrors far beyond their control.

The Government announced they were bringing home some of the innocent, British orphans who had been stranded in appalling conditions in overcrowded camps in northeast Syria after fleeing areas that had been under the control of ISIS.

Their short lives have been full of violence and fear but this brilliant news means these children have the precious chance to recover, have happy childhoods and live full lives. All children deserve that chance. But for the British children among them we can make it happen by bringing them to the UK.

This didn’t just happen on its own. It has taken a huge effort to get to this point and Save the Children campaigners have played an absolutely integral role. They spoke out in their thousands and our Government has listened.

More than 10,000 campaigners emailed the Government calling on them to bring home all British children stranded in north-east Syria. These messages were sent in just five days, as support surged. Other voices joined in. Supportive articles in places like the Guardian and the Times soon followed.

Then we took our campaign direct to those in power. Save the Children projected ‘Don’t leave British children trapped in Syria’ onto the Houses of Parliament the evening before parliament dissolved for the election campaign. We sent a 50 sq m message that children’s lives cannot be left at risk for months in dangerous, freezing limbo while the election unfolds. 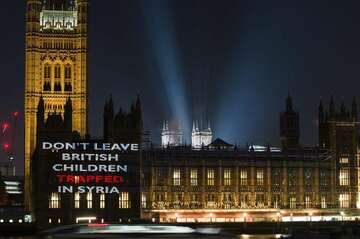 We started seeing positive signs coming from the corridors of power and the Government shifted its position. Foreign Secretary Dominic Raab said for the first time that he thought ‘innocents should not be caught in the crossfire’ and he would look at whether British and orphans could be given safe passage to the UK. MPs from all parties spoke out in support and the Government acknowledged they have a duty of care to the British children in North East Syria. These are the building blocks of real change.

Everywhere we work has one thing in common: children are incredible. They want to play and learn, and just be children again. And they want to grow up to be doctors, teachers and football players. With the right care they can bounce back, recover and amaze us. They just need the chance. These children are no different, no matter what they’ve been dragged into by the decisions of adults.

By starting to bring these children home the Government has shown it’s prepared to do what’s right and stand up for children – even when it’s difficult. But this has to be only the start.

There are still as many as 60 British children that remain stranded in appalling conditions and Syria’s harsh winter will soon begin to bite. All are as innocent as those who have been rescued and our very real fear is that they won’t all survive to see the spring.

Everyone who helped bring these first children home should be incredibly proud, from campaigners making their voices heard to those working tirelessly behind the scenes. Every child saved is a triumph of compassion in the face of cruelty. Now it’s time to finish the job. They must all be brought home before it is too late.