Two major studies on global poverty have just come out. The information they provide can help us to assess progress on world leaders’ ambitions to end poverty in all its forms everywhere by 2030.

The World Bank released new global extreme poverty figures – as per their £1.90 dollar a day measure – sheds light on how little people earn, but not on whether or how they experience poverty in their day to day lives. The United Nations Development Programme and their academic partners, the Oxford Poverty and Human Development Initiative (OPHI), has just released their new Multidimensional Poverty Index (MPI), which provides a complementary picture of poverty and how it impacts on people across the world in many aspects of their lives.

What do these two studies tell us about the most deprived and marginalised children and whether we are on track to meet the goal?

1 Poverty reduction is slowing down

The new World Bank estimates cast a shadow over the previous optimism about the rapid decline of global poverty. We can celebrate that the number of extremely poor people—those who live on $1.90 a day or less—has fallen from 1.9 billion in 1990 to about 736 million in 2015. The global poverty rate has fallen to 10% in 2015, from 36% in 1990. The preliminary forecast is that extreme poverty has further declined to 8.6% in 2018.

The MPI shed a warning that in addition to the 1.3 billion people classed as multidimensionally poor, a further 891 million are at risk of falling into multidimensional poverty, which could happen quickly if they suffer setbacks from, for example, conflict, sickness, drought and unemployment.

We are failing the future generations: children are the hardest hit. The MPI estimates 668 million children are multidimensionally poor. Virtually one in every three children suffer from multiple hardship in their health, education and living standards, lacking such things as clean water, sanitation, adequate nutrition or primary education. The MPI, along with other recent studies, is making us increasingly aware that children suffer disproportionately from extreme forms of poverty.

Disaggregation is key to identify the children at greater risk of being left behind – for example, the map bellow shows poverty is highly concentrated in the northern region of Nigeria. 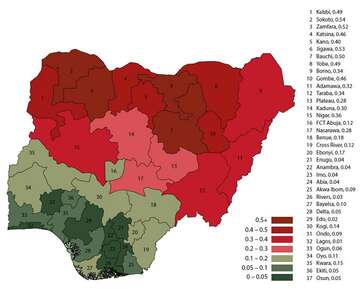 3 The risk of a generation lost

Poverty is found in all developing regions of the world, but as the MPI shows, it is particularly acute – and significant – in sub-Saharan Africa and South Asia. In sub-Saharan Africa, for instance, some 560 million people (58% of the population) are living in multidimensional poverty, while in South Asia the figure reaches 546 million people (31% of the population).

Alongside this, the slowdown in poverty reduction is also driven by conflict and fragility. The World Bank found that conflict in Syria and Yemen raised the poverty rate in the Middle East and North Africa in 2015.

Many of the most deprived and marginalised children also live in middle-income countries, as illustrated by the MPI. As many as 880 million people, two-thirds of all those in global poverty, live in middle-income countries and experience the multiple deprivation in nutrition, schooling and sanitation, just like poor children in low-income countries. Often, deprived and marginalised children are not randomly distributed. Disaggregation of MPI poverty, as well as our own Save the Children analysis,  show particular children are at risk of being left behind because of who they are or where they live in their country.

This is all raising an alarm about the risk of a generation being lost and poorer countries missing the opportunity of the demographic dividend from a young and productive generation. World Bank Group President Jim Yong Kim is rightly calling for more investment, particularly in building human capital, to help promote the inclusive growth needed to reach the remaining poor. At Save the Children we have also stressed the importance of early learning and child development. It is vital we get serious about investing in education. We are also calling for protecting children in conflict, including in Syria and Yemen.

Hats off to the World Bank and United Nations Development Programme for making their research figures available in downloadable format. The World Bank data is available in PovCalNet. In October, the World Bank also plans to publish new ways of looking at and measuring poverty in multiple aspects of life, similar to the MPI. The MPI tables are online, as well as brilliant infographics and resources.