The World Bank launched its new Human Capital Index (HCI) last week. Combining health and education data, it estimates future potential economic productivity – the contribution that children born today could to make to the economy when they turn 18.  The goal of the index – which we welcome – is to encourage more investment in human capital by highlighting countries that are not delivering health and education for their children. The results are already causing a stir; the government of India has rejected the results as they show India performing worse than Bangladesh and Nepal.

The index includes measures of child health and survival (under-5 mortality and stunting rate), the amount and quality of schooling, and adult survival to age 65. The World Bank has made the data available online. While this year’s publication of the index doesn’t include an analysis of differences in human capital between boys and girls, the Bank has taken the welcome step of publishing sex-disaggregated data online.

Unfortunately, data are not yet disaggregated by other groups, such as poor and rich groups, or by sub-national region. We hope that future updates of the index will include this important information to help determine how much inequalities are holding children (and entire economies) back.

We’ve been delving into the sex-disaggregated data to see what stories it tells about gender inequality. The headline is that, in most countries, girls have higher human capital than boys. 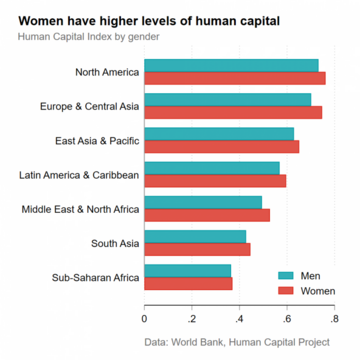 We expected this outcome due to the indicators included in the index. Girls usually have better health outcomes than boys in infancy, notably because of biological reasons, and in most countries girls tend to stay longer at school and perform better than boys. However, the picture is different in the poorest countries in the world, particularly in sub-Saharan Africa, where girls are still lagging behind in education and where, on average, their HCI scores are roughly the same as for boys (see graph above).

On the surface, this looks like good news for gender equality. But there are important caveats.

First, we’re concerned that the HCI presents a skewed picture of girls’ future economic productivity through its narrow selection of indicators – notably those for which girls tend to out-perform boys. As the World Bank’s own analysis shows, girls in many countries face significant barriers to future economic productivity as they grow up, including:

A recent study by the World Bank and ICRW estimated that child marriage alone costs the global economy $500 billion a year. We’re calling for the Bank to unpack this issue and include indicators in the Index that shed light on the impact of the inequality that girls face at key junctures of their lives as they grow up – particularly in adolescence.

Human capital built in early childhood and through education is only valuable for women if they can use it. Ironically, in 110 of 157 countries, the most productive group according to the index (women) is least likely to be employed. This lack of labour market opportunity has direct consequences for women themselves – it entrenches them in poverty. And by not using the full potential of their labour force, countries are wasting valuable resources that could help foster economic growth.

The HCI of people outside of the labour force could be considered as wasted for economic growth. Thus, when looking at HCI for men and women, it is useful to adjust it by the labour force participation to obtain a measure of the “effective HCI”, that is the share of HCI that countries really use (see graph below).  As women have a better HCI than men but are less likely to work, 85% of the wasted human capital comes from women.  Of course, this simple calculation overlooks the contribution that many girls and women make to economic growth through unpaid care work – work in the home that supports others, mostly men and boys, to do paid work. This is another issue that deserves more attention in future iterations of the index and accompanying analysis. 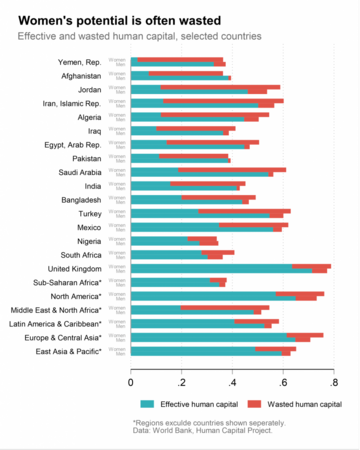 Notwithstanding this important issue, analysis of the gap between potential human capital and labour force participation is revealing. Since the HCI has been designed to reflect the potential gross domestic product (GDP) per worker, it is possible to estimate gains in GDP coming from a change in HCI. We estimated the change in effective HCI in a scenario where the total labour force participation rate remains the same but women and men have equal access to the labour market, and estimated the associated change in GDP.

Our results show that there are potentially huge gains to GDP if women’s potential productivity is translated into labour force participation. The global GDP could increase by $193 billion (+0.25%) if women and men had equal access to the labour market. Interestingly, gains would be much higher in poor countries. For instance, the GDP of the Middle East, North Africa and South Asia could increase by more than 1% (see graph below). 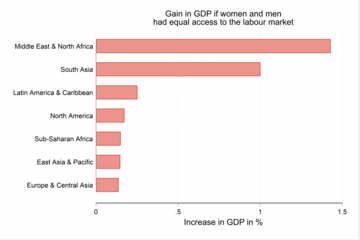 This week, the world celebrated International Day of the Girl under the theme ‘With Her: A skilled girlforce’. Preparing girls for safe, meaningful livelihood opportunities is critical for their economic empowerment – and growing the world economy. While the HCI data contains some good news for girls, it will only represent real progress if this potential is translated into economic empowerment. This requires action to address the barriers to women’s workforce participation that keep them out of the workforce, be they:

We need these changes to allow the ‘girlforce’ of today to contribute to the workforce of tomorrow – to power national economies and achieve gender equality.