Are we doing enough to protect girls from child marriage?

Today, on International Day of the Girl, Save the Children is pushing for urgent action to tackle one of the worst violations of girls’ rights globally: child marriage.

The timing is important. Advocates and policymakers are starting to turn their attention to the High-Level Meeting on Ending Child Marriage on 23 October, hosted by the Government of Senegal in Dakar. The meeting will bring together senior representatives from African countries, civil society, community and religious leaders, and girls themselves to work together to end child marriage.

Child marriage is an extreme violation of human rights. It disproportionately affects girls, depriving them of education, and leaving them socially isolated and vulnerable to sexual and reproductive health complications and domestic violence. It traps girls in poverty, with lifelong impact not only on them, but also on their children.

While the majority of child marriages occur in low- and middle-income countries, it is practised in all corners of the world, despite being illegal in many places. The reasons behind child marriage are complex and vary depending on context. But one driver that occurs in nearly all the contexts in which girls are being married – and which speaks to the scale of global gender inequality – is the negative social norms that exist concerning girls’ sexuality, their bodily integrity and the kinds of opportunities available to them.

Positively, an increasing number of countries across the world are passing or improving laws to outlaw child marriage.  Minimum age laws signal a strong commitment to the global Sustainable Development Goals (SDG 5.3 to end child marriage). But while they offer girls legal protection, such laws do not necessarily mean girls are protected in reality. Many countries still allow marriage consent to be granted at a younger age by parents or the courts, and customary and religious laws can contradict and override national law in many communities.

Child marriage is part and parcel of day to day life in many communities across the world. It’s often viewed as a route out of poverty, as a way of keeping girls safe from violence in communities torn apart by conflict, or as a viable alternative when it’s deemed unsafe for girls to travel to or attend school.

To get a sense of the scale of the problem, Save the Children partnered with the World Bank to explore two key questions:

The results are telling: 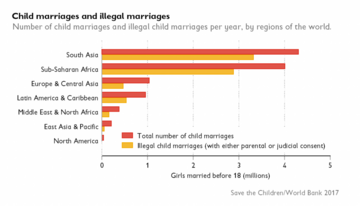 These numbers are should be interpreted carefully. When countries increase the legal age for marriage – which is a good thing – illegal marriage rates increase.

But what the numbers clearly show is that, while the law is necessary to tackle child marriage, it isn’t enough.  Enforcing marriage laws is challenging. A broad set of policies and programmatic interventions are needed to end child marriage.  These include community programmes to shift attitudes about child marriage at all levels; investing significantly more resources in education, health and protection services for girls; and the creation of safe spaces for girls – including those already married or widowed – to support them to have a say in decision- making processes that directly affect their lives.

With the African Union Campaign to End Child Marriage due to end soon, pressure is on national governments to step up to drive change, and on the international community to support and monitor progress. Without a renewed sense of urgency, the world is set to fall far short of the international SDG target to end child marriage by 2030.