Diarrhoea is one of the main killers of babies and young children globally. We know how to tackle it. But a step change is needed. Our Stop Diarrhoea initiatives are leading the way. 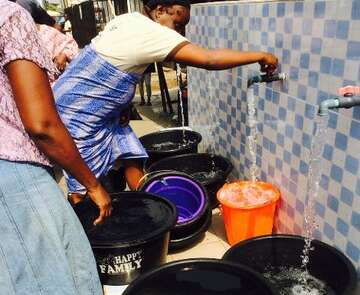 For most people living north of the Sahara, the word diarrhoea evokes fairly benign memories: a ‘Delhi belly’ travel story, a short-lived food poisoning experience, an episode of gastroenteritis or a baby’s reaction to teething.

But for millions of children across Africa and South Asia, diarrhoea can kill. And when it doesn’t, it can cause irreversible damage to a child’s physical and cognitive development.

Last year alone, nearly 6 million children around the world did not make it to their fifth birthday. One in ten died of diarrhoea, making it the second leading cause of death among children under-five globally. Sub-Saharan Africa and South Asia bear the brunt of this awful burden.

To be sure, diarrhoea-led mortality has decreased spectacularly over the past 15 years, from 1.2m under-five deaths in 2000 to around 550,000 last year. But we can hardly find comfort in the idea that half a million children will perish from a common, easily preventable and treatable illness this year.

Diarrhoea is lethal; it’s also pernicious. It increases the risk of malnutrition for children who survive it, as a result of reduced food intake and nutrient absorption. That can have damaging effects on a child’s physical and brain development.

Malnourished children are, in turn, more vulnerable to becoming infected and experiencing severe diarrhoea, and are stuck in a vicious circle of vulnerability to diseases. Diarrhoea is a barrier to child survival, but also to children’s ability to thrive and reach their potential.

The good news is we know how to stop it. Indeed, we have done for a while. Back in 2004, UNICEF and the World Health Organization issued a joint statement, followed by a detailed report in 2009, setting out a series of seven approaches known to work in controlling the spread and burden of diarrhoea. Each approach is underpinned by a global and compelling evidence base.

While all seven interventions are known to be effective in their own right, they had never been implemented together, in an integrated way and in a single place and time.

Until now. Save the Children’s and corporate partner RB (formerly Reckitt Benckiser) are working together in selected parts of Nigeria and India – places where many of the global child deaths from diarrhoea occur – to implement the seven interventions. It represents a bigger ambition than that of any previous attempts to tackle diarrhoea.

By blocking every avenue to the spread of diarrhoea, Save the Children’s joint implementation of the UNICEF/WHO 7-point plan for comprehensive diarrhoea control seeks not just to reduce, but to eliminate the life-threatening nature of diarrhoea, once and for all. It aims to provide governments around the world with a roadmap for scaling up these approaches nationally.

So what does this plan consist of?

Recognising that tackling diarrhoea starts with preventing it from spreading in the first place, the strategy promotes a ‘prevention package’ of five key interventions:

These measures are complemented by a ‘treatment package’ of two key medical prescriptions for children already experiencing an episode of diarrhoea:

The brilliance of this seven-point plan is the simplicity of the framework it provides to help policy-makers to reduce, and potentially eliminate diarrhoea as a killer disease. But the leap from theory to practice is fraught with its own set of challenges. Describing the many challenges would require a long and detailed report (which we’ll be commissioning soon). Suffice for now to cite just three of them.

A number of the approaches listed above cannot be forced upon communities. A new mother can’t be forced to provide her baby with nothing but breastmilk for six months, nor can she be monitored at all times to ensure that she washes her hands properly before and after eating, cooking and going to the bathroom. No single individual can be prevented from defecating in the open if he or she wishes to do so. Parents, community leaders, indeed everyone in a community needs voluntarily to do things differently. Individual and social behaviour change is therefore core to the success of this approach. That requires very specific, culturally adapted, tailored methods of influencing, which can easily backfire if not well designed or executed.

Access to clean water and sanitation, for its part, depends as much on healthy and hygienic behaviour as it does on access to basic infrastructure from latrines to septic tanks, water points and sewage systems, which one billion people worldwide simply do not have. Empowering communities to mobilise, and request access to what is widely considered as a basic human right is a critical part of our strategy for child survival, and will remain so in the years to come.

Moreover, the effective identification, referral and treatment of sick children is a function of the quality of the health system: stockouts of ORS and Zinc are all too common, faulty cold chains cannot support mass vaccination against rotavirus, and the skills and competences of health workers, from community resource persons to head nurses, can be the difference between life and death for millions of children around the world.

Our Stop Diarrhoea initiatives in four states of India and in one local authority of Lagos, Nigeria are still in their infancy. Testing such a comprehensive approach on such a scale will take time for its full potential to be understood and visible. Our latest visit to Nigeria showed encouraging ‘green shoots’. Levels of motivation among ‘resource personnel’ in their communities, and the satisfaction they displayed from being recognised as the ‘water man’ or the ‘health lady’ by people in their neighbourhoods, were a reminder of the importance of communities’ empowerment to create change.

Save the Children and RB have embarked upon an ambitious and hugely exciting learning journey, which will enrich the global evidence base – and we hope will pave the way towards making diarrhoea-led mortality a thing of the past.