Newborns could be at risk in Ethiopia drought 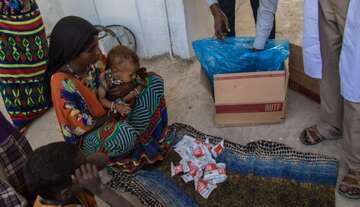 The East African country is facing its worst drought in 50 years – and the next six months will be a critical period.

In August 2016, the country’s ‘hunger season’ will peak. Unless leaders raise the global alarm now, many more children’s lives could be at stake.

Our Ethiopia Country Director John Graham has lived and worked in Ethiopia for 19 years, but he says he’s never seen a drought on this scale before.

The Ethiopian Government has shouldered much of the funding burden so far. But international funding for the response from the international community has been slow to come in. $1.4 billion is needed, but less than one third has been raised to date.  A lot is at stake: an estimated 10.1 million people are in need of food aid.

“If emergency funding doesn’t escalate very soon, there is a real risk of reversing some key development progress made in Ethiopia over the past two decades including the reduction of child mortality rates by two thirds, and halving the percentage of the population living below the poverty line,” Graham warns.

“If they [the Ethiopian Government] don’t get more immediate help from foreign donors they may be forced to redirect funding from other vital areas, including education and maternal and child health programs, in order to buy life-saving food aid.”

“This is a code red emergency and it needs to be treated like one,” he adds, “yet I have never seen such a small response to a drought of this magnitude from the UN or the international community.”

An estimated 400,000 children are at risk of suffering severe acute malnutrition according to the Government of Ethiopia.

Over the next six months, 350,000 children are expected to be born in drought affected areas. John expresses concern about the impact the drought could have on them.

“Giving birth in a desperate situation where there are already serious food shortages, and where livestock have died en masse taking away a vital source of nutrition for breastfeeding mothers, is extremely dangerous for both newborns and their mothers,” he says.

“There are an increasing number of pregnant and lactating mothers suffering from malnutrition because of the drought. This not only reduces their chances of delivering a baby healthily, but also means many will struggle to feed babies who are already significantly underweight. Newborns and pregnant mothers need to have access to quality healthcare services and a nutritious diet.”

We’re  working in over 60 of the worst drought-affected districts in Ethiopia, providing food, water, medicine and crucial support to families who have lost their incomes, with immediate focus on increasing food aid; treating child malnutrition; water trucking; intervening to save livestock and crops where possible; and supporting families to keep their children in school through the crisis.

But with the world’s eyes focused on this week’s Addis conference, John warns that leaders must seize the moment – or risk the number of children suffering from malnutrition rising signficantly.

“If the next rainy season fails again and the international community doesn’t significantly increase funding for this emergency response, we could see the number of children suffering from severe malnutrition rise significantly.”