Learn from the Middle Ages: Malnutrition squandered centuries of potential

Chances are if you spend a couple of days in a very old house, as I have just done, you return with a very sore head!

Why?
Because the ceilings are so low – even my shorter friends have returned with some impressive bruises.

Why?
Because people in the old days were short – in the 15th century, when the house where I spent my weekend was built, men averaged 5ft 4inch (compared with 5ft 9inch now).

Why?
Because in the 15th century, in every section of society, people’s growth was stunted by malnutrition.

Why?
Because no one in the 15th century – not even the then King of England Richard III (a comparative giant of the time at 5ft 8inches) – had access to the things many of us take for granted today: a reliable supply of safe food, sewerage systems, clean water, and decent healthcare (with real, non-leech based medicine).

Is being tall so great?
Not especially. But being shorter than your genetic potential – as they were in the Middle Ages – is a terrible, tragic thing.

Why?
It proves a person’s development during childhood was stunted as a result of malnutrition. And when that happens, the real damage is on the inside. The same process that restrict a child’s height – ie, the right balance of nutrients failing to enter or be absorbed by the body – will have also harmed the growth of some of the child’s most vital organs, leaving them lifelong vulnerabilities to illness, chronic and infectious diseases, impaired cognitive ability and early – often devastatingly early – death. Just think of all the ingenious things that better nourished minds could have done sooner; malnutrition has literally been responsible for centuries of squandered potential.

So, high ceilings of modern times are a good thing?
Yes… well kind of. It certainly wouldn’t be wise to build ceilings as low as they once did. After all, nowadays there is no population in the world where you can assume most people will be stunted. In this respect, our ceilings’ heights are a signifier of humanity’s progress. Over the years inventions and improvements in healthcare, sanitation and agriculture have facilitated our growth and have ensured that there is now sufficient food, knowledge and wealth in the world that no one need suffer malnutrition. In lucky countries, public policies such as universal healthcare, education, sanitation and social protection have done much to prove this.

… but?
Unfortunately there is a massive but. We may well live in a world where malnutrition is theoretically unnecessary, BUT in real life high rates of inequality and exclusion mean there are 159 million children alive who have had their growth unnecessarily stunted. That’s 24% of all children under 5! Furthermore, if you look beyond pockets of positive progress, global efforts to reduce malnutrition reek of complacency. Policies and investments to improve nutrition are not rocket science and yet Save the Children’s forthcoming report will show that that at current rates of improvement there will still be stunted children in the world a hundred years from now –70 years after the deadline our political leaders have set themselves to end malnutrition. 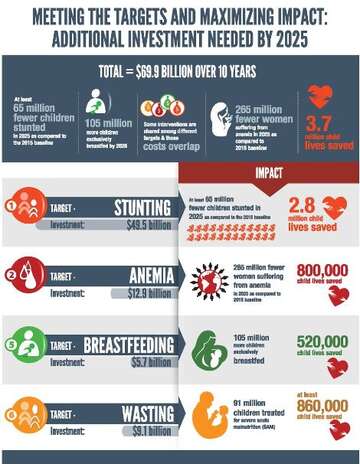 Now is the time to commit to scale up nutrition interventions and deliver proper nutrition for every last child. A new study suggests it’ll only cost $7 billion per year over the next ten years for world leaders to keep their promise to reduce stunting, wasting, anaemia in women, and promote exclusive breastfeeding. That might sound like a big investment to you or me, but when compared with the billions of dollars malnutrition costs in lost productivity and healthcare provision – or for that matter the $1.4 trillion Oxfam identified stashed by US corporate giants in tax havens – it seems like a small price tag for the benefits of such an investment: it will save the lives of 3.7 million children, there will be at least 65 million fewer stunted children, and 265 million fewer women suffering from anaemia.