Insurance is no assurance: why the SDG indicators need rescuing

Last year, all governments at the United Nations approved the 2030 Goals for Sustainable Development (SDGs).

Alongside ending all preventable maternal and child deaths, one of the most exciting and ambitious targets of the goals is 3.8 Universal Health Coverage (UHC) which is defined as including “financial risk protection” to ensure “access to quality essential health care services”.

Ignoring all the jargon, it basically means that people must be protected from being expected to pay too much cash when they need health services. 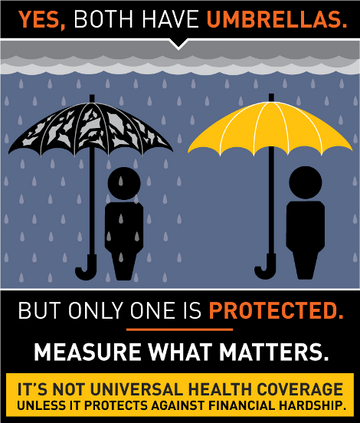 But this important commitment can be completely undermined if the way in which it’s measured is not well chosen. A group of experts are working on the indicators as we speak.

We’re especially alarmed and shocked to hear, this week, what they are proposing.

All the experts, from the World Health Organisation to the World Bank (and Save the Children), have been clear that this means measuring access to services plus also measuring financial impoverishment caused by health costs.

But instead of measuring impoverishment, they are looking at an indicator for “number of people covered by health insurance or a public health system”. This might sound nice, but in reality it is meaningless.

Health insurance can mean anything, at worst tiny, voluntary insurance schemes which cover hardly any services. Insurance is no assurance. Every country can claim that its public health system covers everyone, at least theoretically.

It doesn’t show where it is so badly funded and understaffed that people are forced to look elsewhere and buy whatever they can when they are desperate. As statisticians they should see that this does not measure the UHC target because it does not measure impoverishment.

Perhaps most worryingly, the main impression it gives is that the world’s experts think that encouraging people to buy health insurance is the right thing for a government to do.

Actually, all the evidence is that public financing and mandatory and fair contributions from all is how to fund services that can prevent illnesses and do not ruin people’s lives when they get sick.

We want them to quickly reconsider this and go back to the measure that was proposed by the experts at the World Bank and WHO – assessing the population protected from catastrophic/impoverishing out-of-pocket health expenditure. It is based on tried and tested measures and the same surveys that will measure Goal 1 on poverty would be used.

Omitting a measure of financial risk protection would be a failure to address the impoverishing effect of health spending on some of the poorest and most marginalised groups and, as such, a neglect of equity considerations.

There is remarkable consensus that paying for health should move from out-of-pocket cash payments to fair and mandatory public funding. Universal Health Coverage is about equality in access to health. Missing this point will undermine all the good work of the SDGs.