Why has health aid fallen from DFID’s top area to its fourth?

The UK has long been a world leader in providing support to those most in need beyond its own borders. It was the first – and so far only – G7 country to meet its commitment to spend 0.7% of GNI on overseas aid.

To achieve most impact on the ground, it’s critical that aid is of high quality and spent wisely. The UK has a strong history here as well – notably within the health sector where the Department for International Development (DFID) has provided leadership, not only as a key funder of health projects, but as a champion of helping to build national health systems.

However, recently published figures for UK bilateral aid (aid that is directly spent in countries) show that health has fallen from £1,233 million in 2013 to £1,002 million in 2015, dropping from the largest area of spending to the fourth. It’s now listed below humanitarian aid, government and civil society and ‘multisector/cross-cutting’.   This begs the questions: is health slipping as a priority for UK aid? and does this matter?

Competing priorities
The steady drop in bilateral health aid may signal that DFID is gradually moving away from the social development sectors where it has previously focused and into less familiar areas, such as economic development and infrastructure (which I don’t deny are vital for development), which draw UK aid into uncomfortable issues. The recently tabled Bill to dramatically increase the amount of UK aid going through the Commonwealth Development Corporation – the private equity arm that invests in businesses in developing countries and has been controversial – from £1,500 million to £6,000 million is an example of this. The CDC invests in the for-profit private health care industry without considering how this impacts on health access for the poorest.

It may be that the UK is moving from bilateral aid to multilateral aid, spent through global bodies such as Gavi for vaccines or the World Bank. Over the financial period of focus here, the UK has continued to make significant investment into health multilaterals but without significant increase overall. So this seems an unlikely explanation for reduced bilateral spending.

The case for bilateral health spending
We believe that the UK should continue to provide its expertise in health. In particular, the UK has much to share in health financing and its experience of building and running a universal National Health Service, free to all at the point of use, is invaluable and very different to what other donors and agencies offer. Strategic investments by DFID can use this expertise to complement the work of others and bolster support where it’s lacking. This is especially important now that the Sustainable Development Goals have promised to ‘achieve Universal Health Coverage (UHC)’ by 2030.

UHC is an ambitious target and the international community is critical in filling the gap between what’s needed by populations and what some health systems can currently provide. This doesn’t primarily mean filling the gap with money – although that remains important for many low-income countries – but building capacities, and encouraging fair taxation, domestic resource mobilisation and spending. It’s through these strategic bilateral aid investments that the UK should primarily support governments to make a successful transition to self-sustaining health systems that can deliver UHC.

The economic argument is strong. Spending on health offers particular value for money, with the economic benefit estimated to exceed cost by a factor of 20 in lower-middle-income countries. Benefits such as this need to be demonstrated by the UK government to strengthen the wider case for aid. The health sector is a key area where the impact of aid is clear, and one that the public can connect with.

Fair financing for universal health coverage
Overall, this reminds us that, beyond the medium-term, health systems of low- and middle-income countries can’t rely on their health spending gaps being filled by aid. The global aid budget isn’t growing and can fluctuate depending on many changing priorities in donor countries.

If effective and equitable health systems are to be developed where they don’t already exist then governments need to raise much of the required money through expanding their own progressive tax systems. They should aim to collect around 20% of GDP into the government budget.  Of this, governments needs to commit at least 15% of their budgets to the health sector and follow the lead of the African governments’ ‘Abuja target’ – in commitment if not in execution – and spend at least $86 per person per year in delivering a minimum package of health services.

What’s clear is that adequate and equitable domestic health financing is the bedrock of universal health coverage. Health aid, especially from countries such as the UK, is still needed to help countries to achieve this. 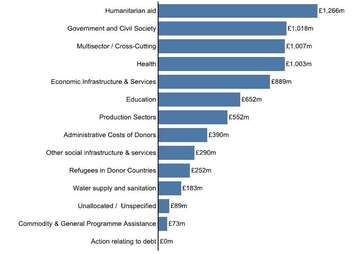