The proof: We can end poverty for good 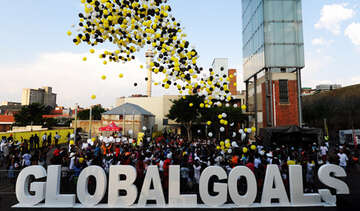 On 5 October, two pieces of news gave us all reason to be optimistic.

The first came in the shape of new forecasts from the World Bank. They showed that levels of extreme poverty (defined by the World Bank as people living on less than $1.90 per day) are likely to fall below 10% for the first time in history.

The second was that within just seven days of world leaders agreeing on 17 Global Goals for Sustainable Development at the UN General Assembly, news of this had reached almost 3 billion people – that’s 40% of the world’s population.

Together, these announcements show that we have the potential to turn the promises world leaders made in New York around poverty, inequality and climate change into reality.

The World Bank statistics, as its president Jim Kim pointed out, underline that we have the tools, knowledge and evidence to tackle poverty.

The wide reach of the Global Goals shows the success of those who have been collaborating to make sure that everyone knows about the promises that world leaders have made.

This has been a collaboration like no other. Mobile and tech giants like Google, celebs like Beyoncé and sports clubs like Liverpool FC have joined forces with charities and coalitions like action/2015, which is made up of 2,000 organisations including Save the Children, to raise awareness of the global goals in communities across the world.

We’ve achieved a lot in the past 10 months. But the hardest bit is yet to come.

Millions of lives depend on this

Wiping out poverty isn’t going to be a walk in the park, especially when we take into account slow and unpredictable global growth, conflicts across the world and the threat of climate change looming large.

But it can be achieved. And with millions of lives depending on it, we have to do everything we can to make it happen.

The world must continue to use strategies that work, like investing in health, education, social protection and women’s empowerment.

We also need to spread the word about the goals – the more people who know, the more likely our leaders are to deliver on them.

September was just the beginning – the even harder work begins now. That’s why it’s never been more important for us to stand together.

Our next task is to secure a strong deal at the December climate talks in Paris. If we don’t take action on climate change we can wave goodbye to that zero poverty target, along with so much of the progress we’ve made so far.

Action/2015 will carry on campaigning to get the word out about the goals, pushing for action on climate and helping ensure that decision makers are held to account.

Over 30 million actions have already been taken for action/2015 this year, with a quarter of a million people coming together in New York and around the world to demonstrate ahead of the UN General Assembly last month. Over the next three months, we need to inspire even more people to take action.

So whether it’s telling your friends about the goals, hitting the streets to take part in climate marches at the end of November or taking action online, let’s keep the pressure up and make sure the world delivers on its promise.

We’re on our way to communicating the goals to everyone on the planet and to ending extreme poverty. Now it’s time to get both jobs done.