The Lottery of Birth: Is inequality in survival chances inevitable?

A child’s chances of survival should not depend on where they are born, how wealthy their parents are, or their ethnic identity. Yet across the world, these factors continue to determine whether a child lives to celebrate their fifth birthday – factors which, for the child, are purely a matter of chance. This unfair lottery of birth violates every child’s right to an equal start in life.

Today Save the Children has launched a new report with new analysis of global progress in tackling this unfair Lottery of Birth. The report celebrates global progress in reducing child mortality in recent years, but raises the alarm that many children are being left behind. Importantly, the new research contradicts widespread belief that reaching the poorest and most disadvantaged groups is harder and therefore likely to slow down progress.

What did we find? 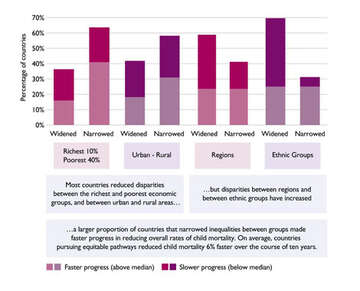 How can countries drive equitable progress?

The report studied in detail the policies that were put in practice by countries that represent stories of success–countries that are making fast progress and while also taking proactive steps to reduce inequalities between groups (including: Ethiopia, Bangladesh, Malawi, Mexico, Nepal, and Rwanda).

A range of policies make equitable progress more likely, including steps towards the progressive realisation of Universal Health Coverage to ensure that poor and marginalised groups have access to quality services that meet their needs and that they are protected from financial hardship.

2015 presents a once-in-a-generation opportunity to put these lessons into practice, and shift the world on more equitable development pathway. Governments around the world must ensure that the successor framework to the Millennium Development Goals (MDGs), to be agreed in September 2015, contains concrete commitments to reduce inequalities. By 2030 no target should be considered met unless it is met for all social and economic groups.

This important commitment must be backed up by concrete plans and mechanisms to track progress ncluding stepping stone equity targets. With these commitments and mechanisms in place, the post-2015 framework would have genuine potential to drive forward long-lasting change for the world’s most disadvantaged children.

Research that sheds light on the nature of the challenge at hand is an important first step.  But there is now plenty more to be done to communicate the findings and engage with policy makers and opinion formers who influence decisions from local to international levels. We should do more than talking to the converters, and target those who still think inequalities in children’s life chances are just an inevitable fact of life, and that reaching the furthers behind is just too costly and would slow down overall progress. Our research shows that fairer progress is not only possible, but is also faster.  In other words, pursuing equity makes practical sense.

Read the report and help us to share it with others: save.tc/TzYG

…and of course get in touch to share your comments on the report!

The background research in this report is based on new data produced, or compiled into, the Groups and Inequality Database (GRID), developed by Save the Children in collaboration with the Development Progress project of the Overseas Development Institute. It is based on direct data processing of 257 Demographic and Health Surveys (DHS) and Multiple Indicator Cluster Surveys (MICS), aggregated public sources (the UN Inter-Agency Group for Child Mortality Estimation, WHO, UNICEF, DHS), and official disaggregated figures for a few countries without survey data. It contains 87 developing countries with disaggregated data on disparities across social and economic groups, and a total of 64 countries with data over time for up to seven data points (170 periods).