South Sudan: Thousands of children separated from their parents

Tonight on Channel 4, following the 7pm News, viewers will be offered some insight into a situation that many of us know little about: the conflict in South Sudan.

South Sudan is the world’s youngest country and has experienced one of the world’s most brutal conflicts.

But compared to Syria and the European Refugee Crisis, it has had little media coverage.

The conflict – which the UN says has often purposefully targeted children – has caused two million people to flee their homes. Over 1.6 million people are internally displaced within South Sudan and more than 600,000 have fled to neighbouring countries such as Ethiopia, Sudan, Uganda and Kenya.

Inside South Sudan, there are 9,000 children who have been forced to leave their homes and are now unaccompanied and separated, without any family to look after them. In countries neighbouring South Sudan, 31,000 children are in this situation.

The Channel 4 documentary, ‘Frontline Family Reunions’, exposes the plight of these children.

Reuniting these children with their families is a priority for us.

We lead a national programme of family tracing and reunification with the support of 20 other NGO partners.

Our staff use a range of methods – including word of mouth – to find unaccompanied and separated children. Using a confidential national database, we then start the process of finding their families.

Whenever safe, we reunite children with their families. When that’s not possible, sometimes due to conflict in their hometown or due to the fact that we can’t locate their parents, children are placed in appropriate care – ideally with foster families.

The children we have helped with the support of our partners have been incredible brave and inspiring. 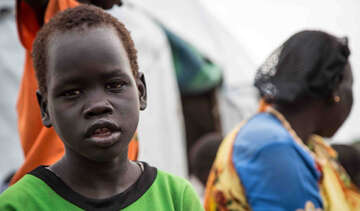 Eight-year-old Gai* (pictured) remembers the day he was first separated from his mother due to fighting.

“We were home, together with the neighbour. When we heard the shooting the neighbour took our hand, and we ran, ran and ran to the river. We heard gunshots, saw people being shot and killed around us. I saw many dead people, dead people in the river.”

When the conflict started, Gai’s mother Yar, 30, had no choice but to flee: “I felt I had nothing more to live for and did not know how I could go on.

Luckily we were able to help reunite the family.

“I remember the day I got the telephone call telling me that my children were alive,” Yar says.

“My heart almost stopped, and I felt like I was flying. I hurried to meet them, and my heart beat so fast right before I got there. Finally they came towards me and we hugged and hugged and hugged.

“Now that I am finally reunited with my children I am happy and a whole person again.”

Sadly there are many more families like Gai and Yar who need to be reunited and, despite a peace deal being signed, the ongoing clashes will inevitably continue to separate more families.

Children are the most vulnerable, innocent victims and we owe it to them not to forget about the situation in South Sudan that is tearing families apart.

You can watch Unreported World ‘Frontline Family Reunions’ on Channel 4 at 7.30pm on Friday October 30th or online.