Nepal six months on: Stories from our teams

The earthquake that hit Nepal on 25 April killed more than 9,000 people and devastated millions more lives. We’ve been doing whatever it takes to reach children affected by the devastation. Here, four Save the Children team members who’ve played important roles in the response reveal what it’s meant for them.

“I will talk of this with my daughter someday”

Database and Analysis Coordinator Kalyan Lama was sent on emergency deployment to Dhading when the earthquakes hit. His wife was heavily pregnant at the time.

“In the middle of my deployment I came back to Kathmandu on work. I met my wife at around 12:30pm that day, and she gave birth to our daughter 15 minutes later. This was the most precious moment of my life.

“I felt like I couldn’t leave behind my beautiful daughter and go back to the earthquake-affected region. But my wife remained my pillar of strength; she kept sending me pictures and videos of the little one.

“We were a team of seven in Dhading, we worked constantly with little regard for food or water, and sometimes we did not know where we would be sleeping. But whenever we looked at the faces of the people we had managed to reach, it was really worth it.

“I will talk about all this with my daughter someday. I hope that whichever path she chooses to follow in life, she will always be inspired to serve fellow humankind.

“This is what humans are supposed to do” 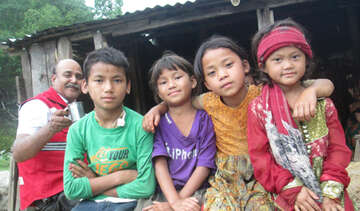 Rishi Ram Aryal worked as a support services driver during the earthquake response; he’s been working for Save the Children for over 21 years.

“It was a difficult time – we kept being stopped by people who wanted relief to reach their communities first. We constantly negotiated and coordinated to make sure we were reaching our target communities.

“I was responsible for much more than driving, and worked constantly to help distribute the materials we had with us.

“Although we faced many challenges, I was motivated by the idea that we were actually making a real difference to people’s lives.

“We were helping them to regain their health and education, we were supporting them to rebuild their homes and lives. That, I think, is what humans are supposed to do.

“These moments make our life meaningful” 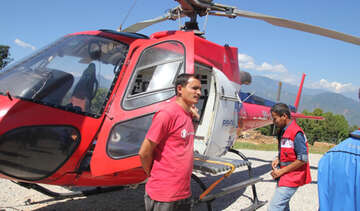 Rohit Dhungana is a distribution officer in Sindhupalchowk.

“Over the last five months, I was the happiest on the day that we went to Dipu – the last settlement before the mountains.

“The residents had received no support at all – there were tears in their eyes when we handed over relief items.

“I cannot express the feelings in words. These moments make our life meaningful.”

“The battle has just begun” 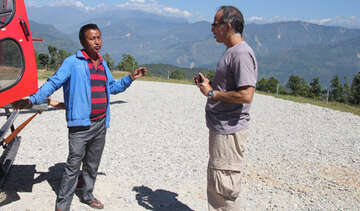 Director of Advocacy and Communication, Sudarshan Shrestha was part of the team that oversaw the final shelter distribution.

“When I saw the helicopter being loaded with the iron sheets against the backdrop of the Himalayan range and the clear blue sky, I wanted to believe that our mission was accomplished.

“Unfortunately, the battle is just beginning. There are more than 2,000 families just within Sindhupalchowk who may not have proper shelter until the next three to four weeks as the cold sets in.

“Petroleum products have been in short supply throughout the country (an understatement); and believe me, most men and women are struggling to cook two meals a day to feed their children.”

Please donate now to help us continue with this vital work.