“I fled from my home during the fighting,” Tabitha* tells me. “I ran into the bush, and when I was there I heard that a close family member had been killed, as well as his wife, leaving their three children without parents. I heard that [the children had also] fled into the bush.”

Tabitha is talking to me outside her makeshift shelter in the camp for internally displaced people in Awerial. Nearly 100,000 people are now living here.

She was, she says, very distressed by the news, and went in search of the three children (Deborah*, 12; Florence*, 10; and John*, 8 months) so she could take care of them. 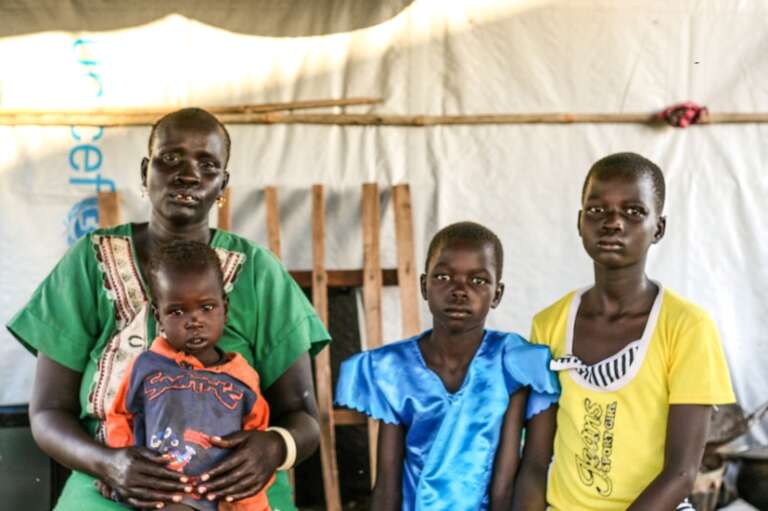 “I managed to find them and travelled with them through the bush to the river, which we had to cross to arrive here.

“Deborah told me that she had had to lift John, who was just 8 months old, from their dead mother’s side so they could run away.”

Many children in South Sudan have suffered similar horrors. They are left alone, vulnerable and traumatised – dependent on the kindness of distant relatives or strangers.

“I took responsibility for these children because there is no one else,” says Tabitha.

Save the Children provides families such as Tabitha’s, where people have taken the responsibility of fostering vulnerable children, with basic household items and  dedicated spaces – a Child Friendly Space and a Temporary Learning Space – where the children can go to play, learn and recover.

“The mosquito net that Save the Children provided means that the children now have something to sleep under at night, because they are sleeping out in the open,” says Tabitha.

“The soap that Save the Children gave us is also very helpful. Now, I am able to wash the children, and also the only piece of clothing Florence has: the blue dress she is wearing.”

Florence was extremely distressed when they arrived in Awerial. “She was very quiet, almost mute, and she wouldn’t open up or engage with other children,” sayas Tabitha. Now that she is going to the Child Friendly Space, she has started to speak a little. She is beginning to join in with the other children.”

Save the Children is doing everything possible to provide children in South Sudan with essentials – but also with space to play and recover. That way, despite the horrors they have endured, they will be able to regain something of the childhood the conflict has taken from them.