Gaza: International community has to stop this war on children 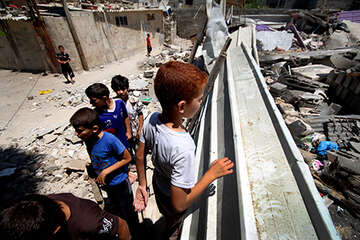 One Palestinian child has been killed every hour over the last two days. The shocking number of children being killed, injured, or displaced in Gaza demands an unequivocal international response to stop the bloodshed.

Entire families are being wiped out in seconds as a result of the targeting of homes. Three weeks into this military offensive, at least 70,000 children have been forced to flee from their homes with their families.

The number requiring immediate specialised psychological support has risen to more than 116,000 children. In Israel, children continue to face the terror of indiscriminate rocket fire.

Save the Children staff and local partners in Gaza are working in areas under fire to deliver lifesaving medical supplies and help the displaced families with mattresses, shelter items, hygiene kits, and baby care supplies, but the needs are simply overwhelming.

“We have witnessed many premature births as a result of the fear and psychological disorders caused by the military offensive,” said Dr Yousif Al Swaiti, the Director of our partner Al Awda Hospital, whose staff have worked more than 1,000 hours in overtime to cope with the continuous influx of patients.

“The number of cases of premature births per day has doubled, compared to the average daily rate before the escalation.”

Dr Raed Sabbah, Director of the Union of Health Work Committees, reports that schools hosting thousands of the displaced are facing extreme water shortages, and families are struggling to find adequate food for babies and children.

Hospitals, clinics and health facilities have been hit, and at least 90 schools have been damaged.

Save the Children is stepping up its response to provide water to displaced families and rehabilitate vital water infrastructure and schools. It is also scaling up its counselling services for children.

A generation at risk

But Gaza needs much more than this emergency response.

“We’re seeing years of work being undone with every explosion, be it civilian infrastructure or the emotional well-being of children we’ve worked with since the previous escalations,” said Save the Children’s David Hassell.

“It is never proportionate to attack schools and hospitals when so many civilians have nowhere else to go. While no party should use these for military purposes, we deplore the use of force we have seen over the past few days.”

“We hear the people of Gaza and Israel telling us things cannot go back to how they were before the current violence started. We’ve been there before and we cannot go there again.”

Save the Children is calling on the international community to respond to the ongoing war on children by exerting all its diplomatic influence to bring an immediate end to the bloodshed and to get all sides to agree to long-term measures that will stop this senseless cycle of violence, including an end to the blockade.

“If the international community does not take action now,  the unfolding war on children in Gaza will haunt our generation forever,” Mr Hassell said.