Ebola Crisis: The need to shed light on this deadly disease 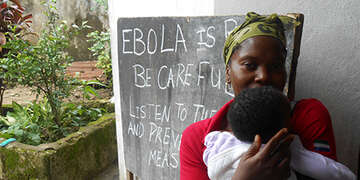 The first sign is as you enter the terminal building. A crowd forms around a large bucket of water with a tap coming from it. Every passenger joins, and one by one washes their hands before going inside. As soon as you get close to the water you can smell the chlorine, stronger than any swimming pool.

Welcome to Sierra Leone in the midst of an Ebola outbreak. The second sign is immediately after passport control. An official points a small plastic-handled device at each person’s temple, looks at it and gives a curt nod, before showing it to the new arrival and waving them through. When it’s my turn I see the digital display reads 36.4 °C. Normal. So on I go.

Ebola is tearing through West Africa. It’s infectious and deadly. This epidemic is killing around half of the people it infects, as though their lives depended on the toss of a coin. Sierra Leone has had over 1,500 cases.

The airport itself is on an island a twenty minute boat ride from the capital, Freetown. It’s 5am and still pitch black as I climb aboard, while rain hammers down and the boat rocks from the wind. From the front seat I can see that visibility is zero. You can only tell we’re moving from the way the boat rears every time we hit a wave.

So much has been said and written about Ebola but there’s still a sense the situation here is equally shrouded in darkness. I know the signs and symptoms and I know the steps to take to stay safe.

Essential to demystify the disease

But I don’t understand. Not what it has been like for this disease to exert an increasing stranglehold over society, seemingly under the world’s radar. Not what it’s like to weigh up the safety of every journey you make.

As we close in on Freetown it slowly begins to become light and I start to make out the city through the murk, stretching away up the shore. I hope that in the coming days and weeks we can say the same for Ebola and its impact.

Demystifying the disease is vital. A lack of understanding, fear and misinformation make the perfect breeding ground. Save the Children has so far trained over 3,000 community health workers who go from house to house explaining how to prevent the spread of the disease.

A crisis at tipping point

But this crisis is at a tipping point. There are new cases every day and we have a small window to contain the outbreak. Without a dramatic increase in the international response, cases could reach hundreds of thousands.

The third sign comes every time you meet someone. Hands twitch almost imperceptibly and an awkward look is exchanged. Nobody touches anyone they don’t know well now, not even to shake hands.

These signs are positive – they are necessary to help slow the spread. But there is far worse. Basic services are taking the brunt. Pregnant women can’t get the healthcare they need.

With schools closed children are at risk of losing their education and with it the futures they dream of. We must shed light on Ebola – to the people at risk and the world at large – and we must stop it now.