CAR: A new year, a new president and the hope of renewal

By early January, the number of people living behind the makeshift barrier at Bangui Airport had risen from 45,00 to over 100,000, most of whom still lack access to basic services. The sanitary conditions are shocking – there are still few latrines and the prevalence of raw sewage makes a cholera outbreak a real risk.

10 January: Michel Djotodia, who had assumed the presidency nine months before via a coup, resigned. As news of this development reached the capital, the streets of Bangui erupted in celebration, waving flags and CAR colours. An interim leader is now installed until a new president can be announced. At Save the Children, we are hoping that this change of leadership will help bring to an end the violence that has engulfed the country for the past 14 months. The displaced people sheltering at Bangui Airport could then finally start to return home.

20 January: Today is a crucial day for the people of CAR, and a major opportunity to finally position the country on the global agenda.  The Transitional National Council are expected to make their announcement of a new transitional president for the country – someone who needs to be ale to keep the sectarian violence in check. There is also an Inter-Ministerial meeting in Brussels today that will decide the level of funding allotted to CAR by the EU in 2014.

Several NGOs have combined to issue a plea for  the people of CAR to be classified as top priority and to receive the same level of attention as other high-profile conflict-ridden countries. John Ging, head of operations at the UN Office for the Coordination of Humanitarian Affairs (OCHA), has issued a powerful rallying call to humanitarians working here. “We have got to escape this small-minded approach for this country,” he thundered. “The people in CAR are dying on our doorstep and they’re all depending on us”. 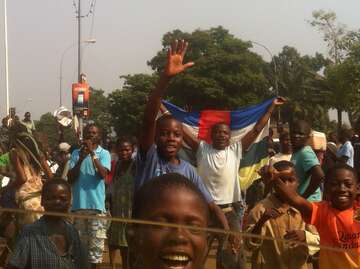 It remains to be seen whether this recent injection of hope will be justified.  As we wait to find out, Save the Children and Merlin (which is now part of Save the Children) remain on the ground, working together in the camps to deliver life-saving health programmes and protection activities for the internally displaced children.

Approximately 4,000 children have already benefited from psychosocial support in our Child Friendly Spaces and we have reunited over 150 children with the families they had lost sight of due to the violence. In the camps and in a recently reopened hospital, our health team is vaccinating around 40,000 children and providing life-saving drugs for close to 30,000 people, the majority of them sick children. There is still much more to be done but we hope that soon, our efforts will be part of a drive that will bring this traumatised country back to peace and stability.