Standing in an evacuation centre in the Philippines after Typhoon Haiyan, I feel a tap on my shoulder and am presented with a huge, heartwarming smile. “Would you be able to help me? One of my students was hurt in the storm and needs medical attention.” The smile belongs to Adalita – dedicated, caring and conscientious headmistress of a local school. 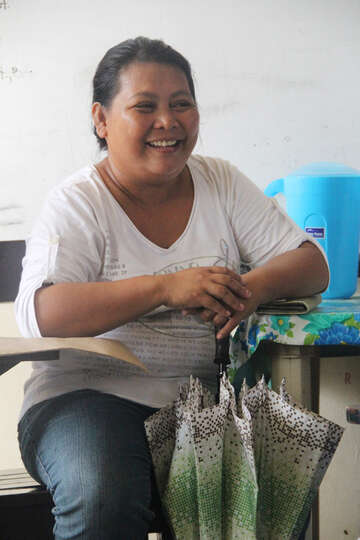 “I was at home during the storm – I felt so scared because the windows were shaking and a massive piece of wood struck my door,” she recalls. “It was so loud and all my children were crying. I told them all to pray for us and the other families affected.”

“People died in my neighbourhood”

The days that followed brought more and more devastating news for Adalita. Her community had been severely affected and her school had suffered extensive damage. “People died in my neighbourhood: parents of children in my school. One of my students lost his leg during the storm and his entire house was blown away.

“There was one family where the father and the son were swept into the storm surge –the son was bashed against an oyster cage but the father dived down and saved him. They got washed away again but it was a miracle and they survived. But the mother and the other two children died.  Many students are now very scared at night – especially when the rain and winds start.”

So many people have been horrifically affected by the typhoon; as the days wear on, the number of stories of children and families’ lives torn apart only grows. But instead of sinking into depression, Adalita has become inspired by these families. “Despite all these tragedies, people have been so positive. I have been so touched by the bravery of the children and parents in my school.” And Adalita’s own efforts to speed up the recovery of her community have been nothing short of heroic. She has brought her school back into operation as well as being a constant source of positivity and support.

“I feel so crazy right now, with all that has happened, but I really wanted to get my school up and running again,” she says. “It’s so important to help children overcome their experiences – to enable them to be with other children their age and share their stories. Eight of my classrooms don’t have roofs anymore. But despite that, we started classes again on 25 November – just two weeks after the typhoon.

She adds: “I try really hard to make children laugh and talk to me and to their friends about their experiences. I hug people lots – especially the parents and children who are bereaved. I held a meeting with all my teachers – they are all affected by the storm but are trying to carry on. I tell them all: ‘Our lives must go on, despite the tragedies. We must continue to come to school and smile and be happy for the children.’ ” Adalita is unfailingly positive and brave – and an amazing advocate for the power of education to provide routine, solace and support in a time of such upheaval and tragedy.

Save the Children provided Adalita’s school with tarpaulin to cover the roofs that had been blown away.