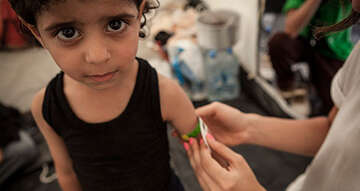 ‘Vaccination ceasefires’ are needed in Syria to prevent the current polio outbreak turning into an epidemic which threatens children across the Middle East region.

Our call comes after the World Health Organisation (WHO) and the Syrian government today confirmed an outbreak of polio in the eastern province of Deir-ez-Zor –  the first time the highly contagious disease has been seen in the country for 14 years.

Before Syria’s civil war began in 2011, some 95% of children were vaccinated against the disease. WHO now estimates 500,000 children have not been immunised.

Half a million children at risk

This means half a million children under the age of five in Syria are at risk of contracting the disease, which is incurable and can result in lifelong paralysis as well as death.

The movement of Syrians as refugees into neighbouring countries means that there is a high risk the virus could spread across the region.

‘Vaccination ceasefires’ would mean pauses in fighting to allow vaccination campaigns to take place across both sides of the conflict.

These ceasefires, also known as days of tranquillity, have previously been carried out successfully in Afghanistan, Sudan and the Democratic Republic of Congo.

WHO is currently drawing up plans to carry out vaccination campaigns but we are concerned that these may not reach all areas of Syria. We believe the response must cover the entire country, including where necessary, across borders from neighbouring countries.

Our chief executive Justin Forsyth said: “Polio doesn’t respect conflict lines or borders so we need these ceasefires to reach all children with vaccines, no matter where they live.

“The fact that an outbreak of polio has now been confirmed in Syria is another sign of the desperate and spiraling humanitarian situation there. The UN Security Council recently agreed on access for humanitarian relief across Syria.

“This polio crisis is a clear test of whether all sides of the conflict will respect the Security Council’s presidential statement and allow unhindered humanitarian aid.’

Save the Children has vaccinated 21,000 children against polio in Syria but we want to reach many more.

We’re also delivering life-saving aid to thousands across Syria and are helping hundreds of thousands of refugees fleeing the war in countries throughout the region.