As the numbers of Syrian children who have fled their homeland reaches the grim milestone of 1 million, Save the Children is warning that those children who remain inside Syria are enduring siege conditions.

Children trapped amid fighting in Syria are being killed, maimed, and denied access to food and medicine.

Our teams on the ground have spoken to families trapped by some of the worst violence yet seen in the two-and-a-half year conflict. They tell of a desperate struggle to survive, living under bombardment, the threat of violence and ever dwindling supplies as the war chokes Syrian cities. 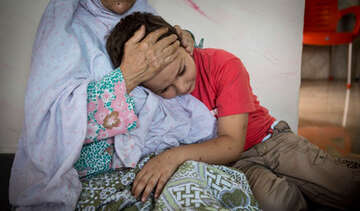 Outside Syria, the number of refugees forced to abandon their homes and livelihoods and settle in neighbouring countries has exploded in 2013, and has seen a tenfold increase since the same day in 2012.

Our Middle East Regional Director Roger Hearn said: “It is appalling that the world has stood and watched as one million children have been forced from their country, terrified, traumatised and in some cases orphaned.

“This is not a crisis we can sit out; it is not going away. The refugee disaster the war in Syria has created is getting far worse, far faster than the world can cope with. It is now critically important world leaders secure humanitarian access across Syria.

“At least 7,000 children are dead and one million have been exiled as a result of this war. How many more grim milestones must the world witness before these horrors can be ended?”

Countries with large refugee populations are struggling to cope with the influx and close to two thirds of funding pledged to help countries deal with the refugee crisis has yet to materialise. In the last week alone, close to 30,000 refugees have fled Syria for northern Iraq.

More than half of all refugees affected by the war are children and they remain the most vulnerable group even after their families have escaped the imminent threat of death inside Syria.

We’re on the ground

The United Nations estimates more than 7,000 children have been killed in the war so far – a number likely to be far higher as most of Syria’s dead are registered without their age.

Without immediate humanitarian access to Syria, Save the Children is gravely concerned the numbers of child refugees will continue to rise as conditions worsen.

Save the Children is on the ground inside Syria and in neighbouring  countries and is doing whatever it takes to give Syrian children and their families the essentials they need to survive. But we urgently need your support: Please donate to our Syria Crisis Appeal