South Sudan: two today but not quite mature yet… 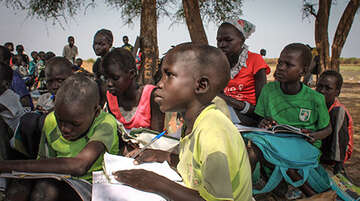 Gatluak stands in front of a primary-school class in Leer, Unity State and talks about what South Sudan’s independence means to him.

“Independence freed us from slavery,” he says. “We suffered a lot but now we have our own nation.” Everyone claps.

Gatluak was 20 when his nation was born, but his enthusiastic audience aren’t his students: they are his classmates.

Like many young people in the world’s newest nation, he never managed to go to school during the long civil war that blighted his country. Now finally, aged 22, he can get the education he has craved for so long.#

Yet like many young people I have spoken to here, Gatluak is uncertain about the future. The excitement and hope that independence brought have become tainted by the realisation of the huge challenges facing the country.

“Now we have freedom, we need everything else: roads, schools and hospitals to improve the development of this nation,” he told me.

He is right. No country can advance without infrastructure of this kind. But in South Sudan the things we take for granted are woefully hard to come by.

After decades of conflict and instability, even the most basic services are scarce and hard to access. Inevitably, this affects children.

A child born at the same time as South Sudan became independent faces some of the harshest living conditions in the world. Less than half those two-year-olds will have the chance to go to primary school and of those that do, fewer than one in five will finish.

One in three will end up stunted as a result of malnutrition, and one in eight will die before they reach their fifth birthday. They are also at risk of conflict, displacement, abuse and in the case of girls, early marriage.

But for me, one fact stands out above all others: in South Sudan, a girl is more likely to die in childbirth than to complete her primary education.

This is what Save the Children is working to change.

South Sudan, like any two-year-old, has so much potential, and this is nowhere as evident as among its children. Even those in the most remote schools are full of enthusiasm for their country and their role in its future. And with twice as many two-year-olds as 21-year-olds in South Sudan, that’s vital.

And the children already know what should be done. 15-year-old David Ghai Mayen from Bor, Jonglei State, told me: “We need security throughout the country to prevent the killing of more people. We need to ensure there are no more landmines. And we need more schools and hospitals and the tools and skills to grow our own food.”

Two years ago, there were parties on the streets of Juba, the capital city. Independence was a great achievement and a new start. Now it is time to forge a future where girls don’t die in childbirth – and do finish their primary education.

Given the young people’s passion for what their country could become, the outlook feels hopeful despite the difficulties ahead. David puts it best: “I hope we will be able to develop like other countries. Even if war delayed us for more than 20 years, I dream that our country will have a bright future.”