Nepal: scrambling to save treasures as the waters keep rising

The drizzle started as we left Dadeldhura for Darchula early on 15 June and persisted for days. By the morning of 17 June, there was word of landslides; houses were being swept away.

The situation worsened rapidly: more and more locals left, moving their belongings to higher ground. Government offices were doing the same. Locals said this was the worst flooding in 50 years.

With no electricity, there was no TV, radio or internet. We were cut off from news. Calls started coming in from worried family and friends elsewhere, who were watching what was happening on TV. My worry ratcheted up to critical levels when I heard from home about the possibility of the dam upstream breaking.

By 4pm we knew rescue by helicopter was not possible that day, due to the overcast sky. We planned to sleep in a house that was on higher ground than the hotel. We headed there around 7pm. We were fortunate to get some dinner.

Falling asleep was not easy in the midst of a natural disaster: we were scared of never waking up. Many people simply stayed up all night. I slept and was relieved next morning to awake to a mobile phone network that was still working. I went for an early walk.

The damage was significant: half the Galfai bazaar had been swept away overnight. Government offices and the district hospital were uninhabitable. People were in a state of shock.

Two days later, people were still moving their belongings to still higher ground as the water continued to rise, salvaging what could be salvaged. There seemed a distinct lack of government presence – besides the army and the police – among the stricken.

We helped to move a hospital vehicle away from the hospital premises; the doctor moved the patients to a spot near our building, and we helped transport the patients in our vehicle. We took frequent walks from one part of town to another to assess the situation. 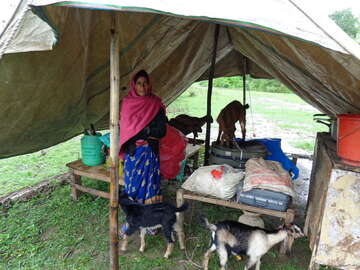 Heading out – but others aren’t so lucky

That afternoon, the office-chartered helicopter finally came to pick up some of our colleagues. It was too late to make a second trip that day but I got on the army helicopter a half-hour later, leaving behind a field coordinator to handle the logistics of the relief goods we had flown in.

Save the Children also plans to bring shelter materials and cooking utensils to the worst-affected families.

In the coming weeks, we will also be working with local partners to set up temporary learning centres for children whose schools were destroyed.

As I left, I saw tents, rice and medicine being carried in. I felt relieved though guilty to be leaving, given the difficult situation I was leaving behind. That night, despite being in the comfort of my hotel room in Dhangadi, I could barely sleep.

Pranab Rajbhandari, Save the Children in Nepal