India was truly at the forefront of global protests in the One Billion Rising campaign. Flashmobs, marches, singing and dances orchestrated in over 200 countries as part of the campaign’s day of action – Valentine’s Day – and aiming to bring an end to violence against women.

Women and men in the community, youth, activists, artists, actors, and politicians all gathered at Parliament Street in Delhi, the national capital.

Save the Children believes that fighting,violence and discrimination against girls is essential to achieving our objectives of stopping children and mothers dying.

Boys are often given extra care and attention, whether it’s giving them more freedom and importance, healthcare, education, or food and nutrition. We need equality for all.

Movement with a difference

Kamla Bhasin, a leading activist and founder of Jagori and SANGAT (South Asia Network of Gender Activists and Trainers), took the responsibility of coordinating the action in South Asia after Eve Ensler, American playwright, activist, and founder of V Day, gave a global call for One Billion Rising.

Kamla said, “I was, however, very clear that the campaign would be different here, which means that though it would be about violence against women and inequality, the medium had to be different.

“Since June 2012, which is when the idea was born, this campaign has been decentralised and democratic. From sex workers to disabled women and acid attack victims – all are taking up their issues.”

What we saw on V Day was the culmination of months of preparation for the big rising across the world.

According to Kamla, “One Billion Rising is a celebration of women’s movement. We have existed for many years. There were drops and today we have become a tsunami.” 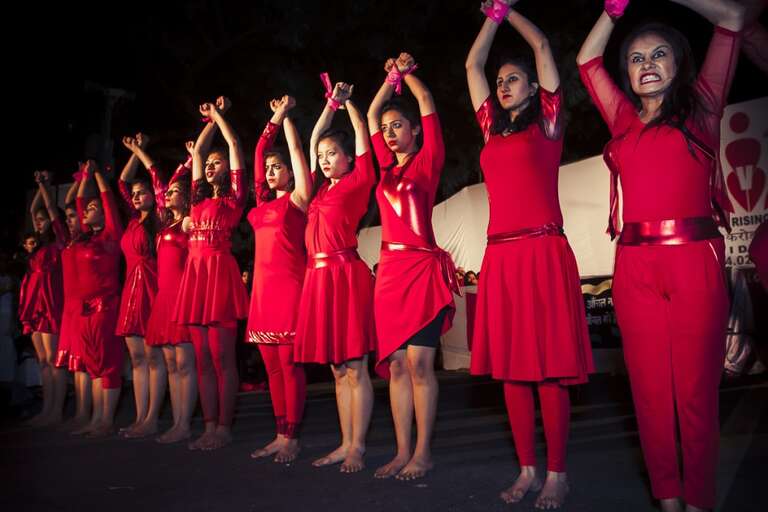 Music, dance and candles of hope

Street plays, marches, dancing flash mobs and various other events were organised in communities, public places, in colleges and schools in which women, men and youth from all walks of life came together to raise their voice against oppression and for justice for women.

A group youths performed in wheelchairs at seven metro stations in the city during the day to raise awareness about the issue with one message – make the world a safe place for women.

These scattered demonstrations throughout the day culminated into one large public gathering in the evening at Parliament Street, starting with one of India’s well-known singers Vidya Shah singing Sufi songs of freedom and emancipation, followed by poetry, song and dance performances by students of Lady Shri Ram College, Miranda House and Kamala Nehru College.

The evening culminated with lighting thousands of candles – candles of hope that women will be free from all exploitation. 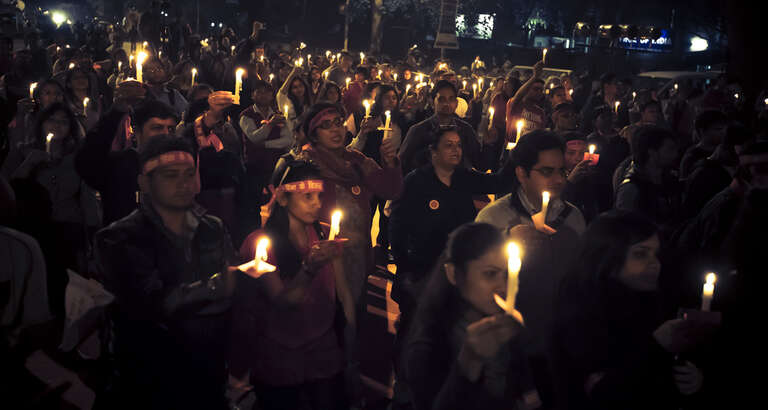 Enough! No more violence against women and girls

One Billion Rising was truly a historic moment for the world to see.

For the first time the world has been swept by the power of women and men rising around the world.

For the first time nations are rising to say – “ENOUGH, NO MORE!”