DRC: “I don’t have my freedom here”

My name is Olga and I work in Save the Children’s health team in DRC.

Conflict has broken out again in North Kivu, eastern DRC, and the impact on the health of the local population has been dramatic. Save the Children’s team here have been working around the clock to respond to the growing needs of mothers and children.

Sadly, we’ve seen many cases where the conflict has forced pregnant women to give birth away from their homes. Many have developed complications and often don’t have enough food, water or rest.

Part of my job is to support these women – referring them to health facilities and ensuring they’re accessing proper pre-natal and post-natal care.

During a recent visit to the hospital, I discovered a particularly shocking case of three women and their three babies (pictured below).

Pregnant on the move

The women’s stories began in September when they were forced to leave their homes amid fighting between armed groups – all were eight months pregnant at the time.

Separately, the three women made their journeys to Goma, the capital of the North Kivu region, but all had developed complications.

After arriving at the local hospital in October and November, the women all underwent caesareans.

The operations saved the lives of all three mothers and their babies. But their ordeal was far from over. 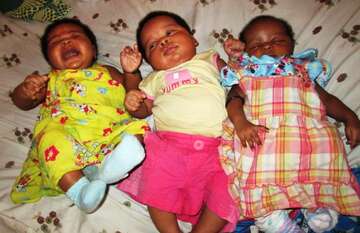 When they recovered from their operations, they realised they were left with hospital bills they had no way of paying. Unable to leave, they’ve been in the same ward ever since.

I immediately went to meet them in hospital.

“My name is Amboko and I’m a mother of three children, I’ve been in the hospital since 28 October last year.

“After two days in labour, the doctors decided I needed to have a caesarean to save mine, and my baby Faustine’s life. Everything went well but a few days later I was handed a bill that I couldn’t honour.

“I depend on my family to bring me something to eat, but it’s been a while since they visited.”

“My name is Wimana, I’m 17. I arrived in Goma in September to flee the attacks. My husband is a police officer – I’ve tried to contact him, but haven’t heard from him since October. I’m helpless.

“My baby and I aren’t doing very well, we’ve had flu for almost a week. I’ve been given a prescription, but I can’t pay for the medicine. I don’t have my freedom here.”

“This time here since has been the worst of my life. I have no family members here and finding enough food is very difficult.

“Thanks to the kindness of some local people, they’ve brought some food to us women here, which we share. It’s very difficult; I don’t even have any soap to wash my baby. How can I ever pay my bill?”

A note from our health experts:

Amboko, Wimana and Rebecca’s situation is unfortunately common to many women living in poverty in the DRC.

While aid agencies likes Save the Children may be able to occasionally help a few individual women, it is the responsibility of the DRC government to look after the basic health needs of its citizens, especially the most vulnerable, such as pregnant women and children under five.

Save the Children is working with the Government of DRC to build and strengthen the national health system. We know that systems that ensure the most vulnerable don’t have to pay for healthcare are successful, and we will continue to advocate for universal access to healthcare – through ensuring only those who can pay for health care do, and by building the capacity of health workers to provide quality health care.