Aid to poorest is the likely victim of EU budget cuts

EU leaders are gathering in Brussels once again at the end of this week for an EU summit.

The main topic of their meeting is not to respond to the financial crisis or the euro crisis, but to plan the EU’s budget for the rest of the decade, the EU’s multi-anual financial framework (MFF).

These negotiations are always fraught as each country tries to get as much as possible from the budget while giving as little as possible to it.

But the austerity of the present time has given added weight to these tensions as countries are even more eager for the EU to add to their reduced domestic expenditures while also not wishing to add more to the EU with larger budget contributions.

There is also added pressure on the leaders to agree as they failed to do so last November when they first attempted to settle the MFF.

Unfortunately, the EU aid budget is looking likely to be an innocent bystander, caught in the crossfire of these negotiations.

Despite the entire EU external budget (that includes aid) amounting to less than 7% of the total, this part is where cuts are being sought the most as it’s where no EU country domestically stands to gain directly.

The approach of cutting from such a small part of the budget may be like seeking to lose weight by having a haircut, but domestic priorities are forcing the hand of the negotiators. And yet this part of the EU budget is judged internationally as both effective and good value for money.

As I’ve blogged before, EU aid does work. And it only costs each person €1.87 a month. EU aid is supported by 85% of EU citizens.

So, the result of these negotiations looks to be reduced assistance from the EU to those who need it most. Worryingly this includes the scale of assistance in emergencies the EU can provide for the rest of the decade.

The result of a collision between austerity with domestic or eurosceptic priorities therefore looks likely to be those needing EU assistance the most will be hit the hardest. 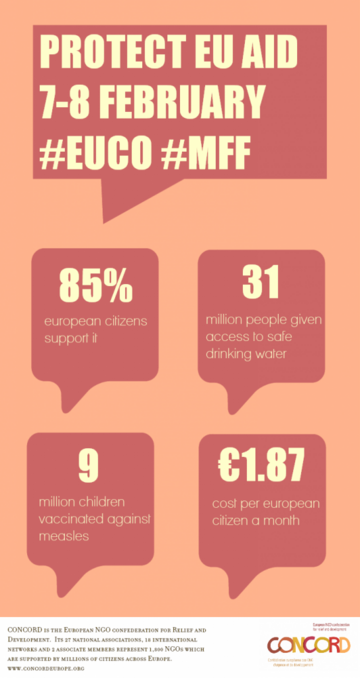