The Philippines: Typhoon Bopha leaves a trail of destruction

A day after Typhoon Bopha hit the Philippines, I flew to the southern island of Mindanao where more than 600 people in the typhoon’s path had been killed and hundreds more injured. 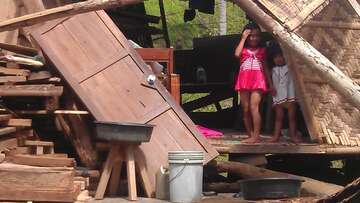 This is my third visit to the Philippines in the space of 12 months. Almost exactly one year ago I responded to Tropical Storm Washi, which triggered flash floods that killed over 1,200 people.

In August this year, I came to support our relief response for the floods that swept through Manila, forcing hundreds of thousands of people into evacuation centres, some of whom are still living in them three months later.

Now, I’m back for yet another emergency. This one has affected over five million people and forced nearly 400,000 to seek shelter after their homes and livelihoods were destroyed.

People who have lost everything

Flying into Davao City, I could see where houses had been swept away by the coastal waters. On the drive from the airport to the office, I passed heavily flooded rivers, lapping over roads and bridges.

Save the Children has set up an office inside our warehouse. Every day I see the flow of essential relief items being delivered, and every day more go out again, destined for people who have lost everything.

Where have the schools gone?

So where are the children going if they are not in school? I’ve seen children begging in the streets, or playing in severely damaged houses that were leaning so far over I can’t understand how the walls are still standing.

Children are the most vulnerable in an emergency and especially in the time after the disaster when their lives continue to be disrupted.

Community leaders have told us that children are showing signs of post-traumatic stress and are getting extremely scared by rain or the sound of wind rustling their houses. It’s been raining at night lately, especially scary for children living in areas where there is still no electricity.

Donate to our work in emergencies

Safe areas for children to play and learn are essential in an emergency. Children need to be able to return to being children, continue their schooling and have the space to play with their friends in a safe environment.

We’re working with partners and local communities to make sure that the children here are able to do exactly that.