Syria crisis: children out of school for months

We left Amman in the early morning and drove north through the desert to the Syrian border. We passed camels and herds of goats as we spoke of the growing wave of Syrians fleeing into Jordan.

In the past week, an estimated 1,000 Syrians have crossed to Jordan daily – more than double the daily total from last week.

United Nations High Commissioner for Refugees (UNHCR) estimates the number of Syrian refugees registered in Jordan will reach 150,000 in the next several months – today there are 36,000, though many think it’s already reached 100,000 if you add those unregistered.

The ‘My Space, My Place’ project 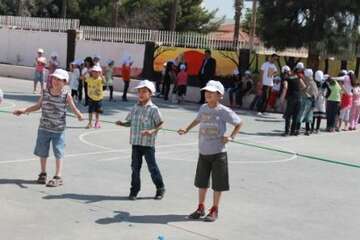 Our first stop is a summer camp primary school in Irbid – one of our ‘My Space, My Place’ projects, targeting 5,500 Syrian and Jordanian children.

As we arrive, nearly 100 children aged 6 to 14 – all with white caps to shade their faces from the hot sun – are laughing and shouting, working in groups under the watchful eyes of local volunteers.

There are hoola hoops, tug of wars, songs and clapping.

All of these children are from towns scattered across the border in Syria. Now they’re squeezed into shared space in rented rooms, most of their fathers absent. Many haven’t attended school for months.

Here at camp, they have room to play and feel safe. There are classes  to help students catch up with the lessons they’ve missed because of the conflict.

The disheartening news is that the volunteer teachers say they don’t know how all the Syrian students will fit into their classrooms once school begins in September. 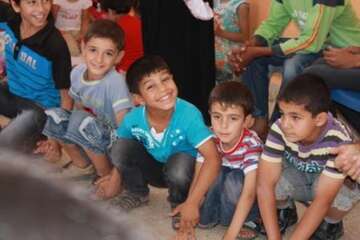 Later, in Mafraq, another border town inundated with Syrian refugees, we visit a child-friendly space run by Save the Children, where children can play, learn and regain a sense of normalcy after what they’ve been through.

As children sit in one room and engage in the serious task of making colourful masks out of construction paper, their mothers gather in the next room.

I’ve visited hundreds of child-friendly spaces during my time with Save the Children. It’s one of our signature programmes, but this one is unique because there’s also a space for mothers.

Here, a group of about 20 women – all in their black abayahs and head scarves despite the heat – talk of their situation.

Facilitated by Save the Children’s Laila Hussein, the discussion focuses on how their children are coping.

One by one the mothers call out behavioural problems they see in their kids: anger, fear, sadness.

A couple of kids are here with us, refusing to go to the next room with the other children, preferring instead to cling to their mother’s robes as they participate in the group.

Most of these women have at least four children. One has seven.

None of the mothers have their husbands with them. None are making an income.

When one starts to weep, the others quickly join in but Laila manages to move the group past the sadness to talk about practical things: sending children to school, not watching the violent news of Syria in front of small children.

One woman says the only thing she has to look forward to is coming to these sessions twice a week.

“I wake up happy on the days I know I will come here,” she says.

Our team here is rushing to provide support to refugees and local communities in Mafraq, Ramtha and Irbid.

Our response aims at improving the quality of education, protection and nutrition for Syrian children and ensuring they have access to protective and developmentally appropriate education, relevant to their present, as well as future circumstances.