Rwanda: the importance of play, even in a refugee camp 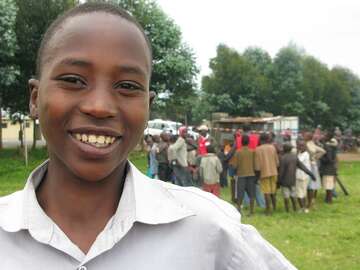 Innocent is 12 years old. He came to Nkamira Transit Centre with his mother and one younger sister.

His father decided to stay behind in Goma, just over the border in Democratic Republic of Congo (DRC), in order to take care of their family’s cattle, which are valuable assets.

Innocent tells us that many families split up like this, which explains the very high number of women and children among the refugees in Nkamira; United Nations High Commissioner for Refugees (UNHCR) puts the figures at nearly 85%.

Refugee numbers increased rapidly, and there are now over 12,000 people living in Nkamira.

Back in DRC, Innocent was in the fifth class of primary school. That abruptly stopped when his family was forced to flee the fighting and cross the border to Rwanda.

When they first arrived, there was nothing to do in Nkamira and he and his friends would just wander around. He also had to help his mother with domestic tasks, such as fetching water.

Innocent has been attending the recreational activities organised by Save the Children in Nkamira.

With a broad smile he says he’s really happy when he’s engaged in the activities, and proceeds to list his favourite ones: football, volleyball, and singing – especially a local song about not being able to sleep without high morale.

Save the Children sets up child-friendly spaces during emergencies in order to bring back a sense of normalcy to children’s lives, and to occupy them with activities designed to stimulate their growth in a supportive environment.

Even though Innocent comes across as bright and happy, it’s important to not underestimate the effect that such a sudden upheaval can have on families and in particular, children.

Innocent also tells me that Save the Children has been teaching the children in his group some tips about health and hygiene, and the importance of washing their hands. They even learned some songs to go along with these messages.

Innocent gestures to another fenced-off child-friendly space a few hundred metres away where a larger group of children are playing.

He explains that his little sister is there. On other days they’d been in the same group, but she changed today as she didn’t want to play football.

After a few minutes chatting, Innocent is anxious to get back to his group of friends to continue the afternoon session of activities.

They have formed a circle and are taking it in turns to tell jokes or stories. At the sound of uproarious laughter, Innocent runs back to join them.