Just over a month ago, refugees from the Democratic Republic of Congo (DRC) began crossing the border in to Rwanda.

They were fleeing fighting between rebel militias and government forces in North Kivu Province.

Numbers have continued to increase and by last week (early June), around 11,000 refugees were being accommodated temporarily at the Nkamira Transit Centre, some 25km from the DRC border. Officially, the Centre can hold 2,600 people.

Nearly 85% of these refugees are women and children.

Overcrowded and dangerous
When we entered Nkamira we could see that the vast majority of refugee children were spending their days roaming around aimlessly in the hugely overcrowded camp.

This left them exposed to numerous risks. Risks included playing in areas in which there was heavy moving traffic; being unprotected from the heavy downpours and mud; being left unaccompanied and thus exposed to abuse and violence; and being neglected by parents whose minds were focussed on the recent upheaval.

To put it simply: their physical, emotional, educational and psychosocial needs were not being met.

We are running activities that look to meet these needs.

Our Child Friendly Spaces are helping to provide safe places for children to spend their time rather than loitering in unfamiliar and potentially dangerous surroundings.

Our trained staff carry out a wide range of activities with the children in the camp to keep them busy and engaged. Through songs, games, sports and dance, children are given a space in which they can be children. 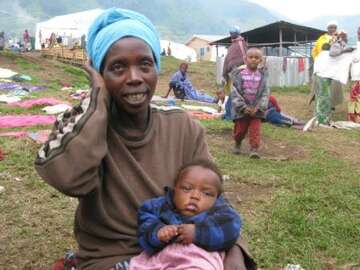 Nzamutunga has eight children. The youngest is four months old; the oldest 17 years.

The children all came with her to Nkamira as there were rumours that the rebel forces in DRC would try to recruit children, especially teenage boys. Her husband decided to stay in DRC since they have three cows which are valuable and need daily care. “It’s dangerous,” she says, “but many men stayed, and at least we can speak by mobile phone”.

When they first arrived at the Centre, the children were confused and frustrated.

Nzamatunga explains, “They were just sitting down doing nothing and looking bored. Now the children think it is fun here.”

The children are taking part in Save the Children activities. Their mother laughs as she relates how they tell her each day about the activities they have done, the songs they have learned, and the new games they have played. She says that they even continue the game of ‘cat and mouse’ in the evening, because they find it so funny.

Nzamutunga is happy that her children now have something fun to do during the daytime, she is also relieved that for a few hours each day she can concentrate on taking care of her baby, Agathe.

“Now, I am not worried about where my children are”, she says.