As the BBC’s Today programme continues its yearlong focus on Liberia, Mike Sunderland travelled with presenter Sarah Montague to examine the deadly risks faced by child mothers throughout the country. 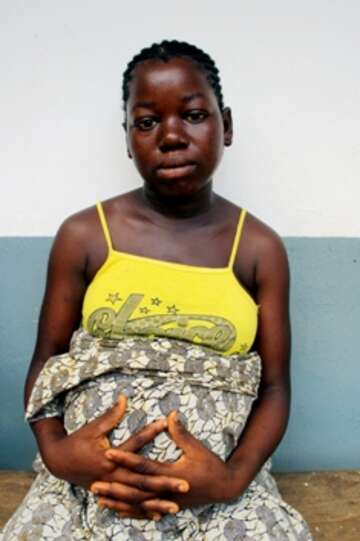 One in a million – that’s 13 year-old Gorma Farmah, and, with our help, she’ll stay that way.

But Gorma’s age puts her at risk of becoming one in the million children who die or are seriously injured each year because they become pregnant. She is getting help but millions of others are not.

Save the Children says pregnancy is now the biggest killer of girls aged 15-19 worldwide and there are few countries in which this will raise more alarm than Liberia, where a third of all girls are mums before they are adults.

We met Gorma, a cheerful teenager, at her village Sanoyea, deep in the lush, green forests of Liberia’s Bong County.

Gorma, who was 12 when she became pregnant, is now nine months along. She has just recovered from a bout of malaria, but is likely to face more health problems in years to come.

Pregnancy can be a death sentence

At thirteen, pregnancy can be a death sentence, particularly in developing countries where families might have limited access to trained healthcare. The likelihood of Gorma dying during childbirth or due to health complications later in life is now five times higher than if she had been over eighteen when she became pregnant.

This is not scaremongering – around one in every hundred mothers in Liberia die during pregnancy or soon after – the fourth highest rate of maternal mortality anywhere in the world.

Many of those deaths can be put down to a health system decimated by fourteen years of civil war that ended in 2003. Liberia is rebuilding steadily but still has only around a hundred doctors serving a population of over three million. Pregnant girls in remote villages might have to walk for more than a day to find trained help.

Many dying mothers are children

Alternatively, they might rely on untrained traditional midwives whose techniques have included sitting on the mother’s belly to push the baby out.

But many of the mothers dying here are children. And giving these young girls a chance to make educated choices on if and when they become pregnant could be key to saving lives.

Gorma has not had the benefits of a full education. Primary schools are still backlogged with pupils as old as twenty-two, each struggling to catch up following the breakdown of the school system during the war. She has never received sex education or heard of a condom or contraceptive pill.