Niger: where every mother loses a child?

I can hear him from outside the clinic. The heavy breathing, the sobbing.

I enter the stabilisation centre and see Abdul Aziz, one of the clinic‘s nurses, about to take a blood sample from Hanafi, a severely malnourished seven-month-old.

This is a stabilisation centre for malnourished children in Matameye, one of five such centres in Niger supported by Save the Children. 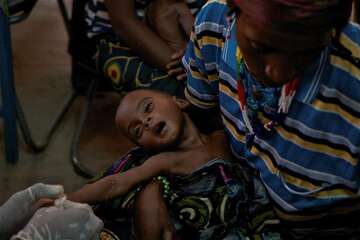 No energy to cry

It takes some time to find veins on Hanafi’s body, but eventually Abdul Aziz manages to.

Hanafi is in pain but doesn’t have any energy left for crying. He breaths heavily and shivers.

The average number of children being brought to the centre each day is five.

Today there are 35 children being treated, but some days there as many as 60 children here.

Mourdja, one of the women who recently brought in her four-year-old daughter, Aicha, gave birth yesterday to a little boy, her fourth child. Luckily, both are in good health.

Mourdja is one of the few mothers in the room who hasn’t lost a child.

Statistics on Niger will tell you that once a mother in Niger has given birth to seven children – the average number of children per woman – one of them will die before reaching the age of five.

It’s a staggering fact that every mother in Niger is likely to lose a child.

Many of the women have brought their children in too late. Sometimes they may not have permission from their husbands to leave the house to seek treatment, or the transport may cost too much.

One of the decisions parents and guardians also have to make is whether it’s safe to leave all the other children at home, while seeking treatment at a clinic for the one child showing symptoms of malnutrition.

Will they be OK? Shall I leave my four children at home, while taking the fifth to a clinic and risk being away for days? There are easier decisions in life.

Before leaving the room, I look at Aicha one last time. She has sat up in her bed. She’s gaining strength and she’s doing better.