India: “We know the water is bad but what can we do?” 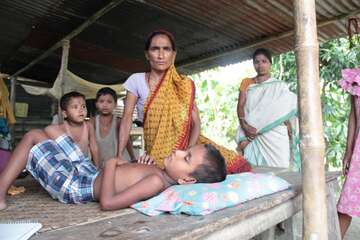 In a makeshift house with no walls and just a tin sheet to serve as a roof, six-year-old Mutibur is sleeping.

The other children are playing, their spirits not dampened by the recent flooding which has made them homeless, but Mutibur does not stir for a long time.

“He has been sick for eight days now,” says his mother.

Mutibur had diarrhoea and a fever before the floods. His family got him medicine from a local doctor.

He was getting better when the flood water rushed from the Barolia river and breached the embankment across which he lived and his medicine was washed away.

“We could not save a thing,” says his mother. The family shifted to the embankment, a raised stretch of land, and waited for the water to recede.

With water to splash around in, Mutibur joined other children who often played in water.

“They would wade in the stagnant water for hours,” says Ahmad, who lives on the embankment.

Soon, Mutibar had another bout of diarrhoea and fever. This time, the family couldn’t get him treated.

“Our life is in disarray. We have so many things to do,” says his mother. As the family salvaged a few items that weren’t washed away, Mutibur’s condition worsened.

“He hardly gets up now. He lies for the whole day, mostly asleep,” she adds.

A visit from Save the Children

A team of Save the Children and Gramya Vikash Mancha (an NGO working in Nalbari) visited Mutibur’s family after a 3km walk on the embankment and gave him oral rehydration salts and medicine for diarrhoea, and advised his mother to seek medical support urgently.

The nearest health facility is more than 5km away, and Mutibur’s father is away to look for work with their savings exhausted.

Diarrhoea is on the rise in the districts affected by the floods in Assam.

In Gonakpara village in Barpeta, three-year-old Munira had a fever and diarrhoea.

Her family had been living in a camp set up in a school outside the village.

The only hand-pump in the camp delivers poor quality water and has visible impurities.

“We know the water is bad but what can we do?” says Anwar.

Save the Children’s Manager for Disaster Risk Reduction, Ray Kancharala, says that during floods access to water, shelter and food are usually severely compromised.

“Restoring these is the first firm step in restoring normalcy. Early recovery is critical in saving lives.”

Written by Anupam Srivastava, Save the Children, India