World Marathon Challenge: how it all began

Save the Children joined forces with Sportshall in 2011 to take the event around the world and link it to our worldwide campaign for child survival.

On Wednesday 5 October 2011, nearly 2,000 children from more than a dozen countries across the globe, from Canada to China, took part in the World Marathon Challenge, with sponsorship from the Amateur Athletics Association (AAA).

Each team was aiming to beat the marathon world record time of 2 hours, 3 minutes, and 38 seconds, set only the month before in Berlin by Kenya’s Patrick Makau.

The 2011 events took place on running tracks, playing fields and a variety of other open spaces marked out for the activity; we proved that it works equally well in a Kenyan field or a Mexican football pitch as it does in a world-class athletics stadium.

Simple and low-cost to organise 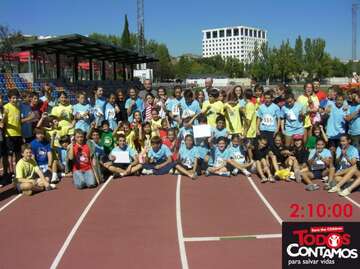 Each local event can be organised very cost-effectively. The vast majority of the 2011 events in developed countries were organised by teams of fewer than ten volunteers, with budgets ranging from nothing to around $500, depending on the degree to which the event was branded.

One of our volunteer organisers in New Zealand reported that his budget was zero, save for the cost of 211 jelly snakes that they used to reward children on the completion of each 200-metre leg!

In most cases, the crucial ingredient was a motivated coach, school teacher or volunteer who grasped the idea, engaged their local school and made it happen. Some local events were organised with as little as two weeks lead time.

Eight teams from four different countries overhauled Makau’s record time, with the team from Kenya – supported by Patrick Makau himself – top of the table with a remarkable time of 1 hour, 51 minutes and 52 seconds.