Bangladesh: a bank by children, for children

Many children in the developing world have no option but to work to support themselves and often their families.

You’ve no doubt heard about the hazardous and dangerous conditions they’re often forced to work in, the disruption of their education and their higher vulnerability to exploitation.

These are all very important issues, which urgently need addressing, but have you ever wondered where these children keep the money they work so hard for? 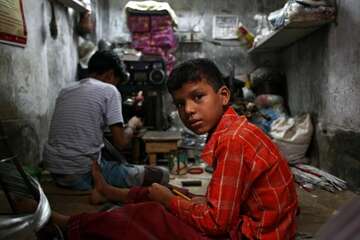 Adults can open bank accounts and safely deposit the money they earn, but what about children who work just as hard for the same hours?

Most children can’t open bank accounts without the signature of a guardian, but there are a lot of children who are forced to work for the heartbreaking reason that they have no guardian to support them.

Save the Children in Bangladesh is supporting an initiative called Chaya Brikhkho or ‘Shade Tree’, which provides a service for street and working children to save their money, as well as a security nest for them to access during times of crisis.

These children’s banks work to open doors for these children and generate training opportunities and prospects for income-generating activities through their savings.

Also, these children’s banks are a platform of friendship and a wider network, which empowers children and gives them a forum to raise their thoughts on rights violations they experience in daily life.

By children, for children

The initiative is targeting children living on the streets or working informally as rag pickers, waiters, paper and popcorn sellers, beggars, tailors and domestic workers.

The bank works with partners including a large international bank who provide the mother account to Chaya Brikhkho and local charity organisations who work closely with these children, providing shelter and non-formal education.

The aim of the initiative is to have a bank run by children, for children.

A team of eight children and young people have been brought together to run the banks and two young people are working in the bank as manager and accountant.

There are also two adults involved to facilitate and support activities, which include weekly collection and distribution of money, providing child-friendly deposit books, cheque books and withdrawal forms.

Chaya Brikhkho has reached 610 children so far and is aiming to expand to reach more children.

One of these children is 12-year-old Sharmin who works as a domestic worker in Dhaka.

She’s been saving around 50 taka (40p) a week through the saving scheme. At the end of June 2012, she was able to withdraw 1,000 taka to give to her father so he could invest in his fish-selling business and try to raise his family out of the extremely poor conditions they currently live in.

Another member of the bank, 12-year-old Shakilis withdrew 3,000 taka from his savings account to pay for medical treatment when his father fell seriously ill and was unable to afford medical care.

Two of many inspiring cases of children who have been given the opportunity to support their own very poor families in times of crisis.