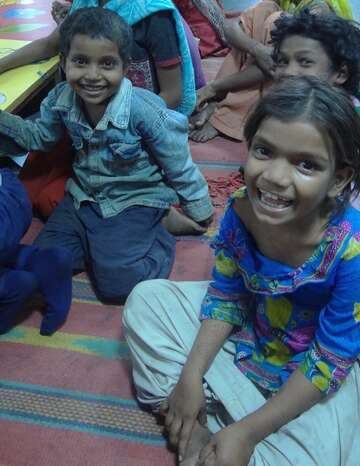 One week into the job and I have my first visit to a programme: a school for street children in Delhi.

The centre is just round the corner from the Save the Children office and is tucked away above the hundreds of IT and phone shops in the self-proclaimed biggest IT market in Asia.

As I walked there, I was preparing myself for the heart-wrenching feeling I get everyday when I see so many children begging and ragpicking on the streets of Delhi.

What I was greeted with was 30 smiles from children who were happily drawing away in a safe and brightly coloured classroom.

A chance to be a child

The children, most aged between 6 and 14, were so full of energy, interacting with their teacher and fascinated by their new visitors. These children seemed genuinely happy to be there – such a contrast to children in Western countries who so often take education for granted.

Most of the children are ragpickers, often making just 100 rupees (£1.10) a day despite working from dawn till dusk collecting rubbish. That is apart from the three hours (10am-1pm) they spend at the centre where they are taught numeracy and literacy, given a hot nutritious meal, and receive healthcare.

It’s hard to imagine how these children work such long hours without something so basic as a safe place to sleep.

From street to school

The aim of the Street to School programme is to get street children into the mainstream education system. They are taught on average for six months to a level where they can enrol into the local school.

So far, the centre has taught 379 children (reaching approximately 90% of street children in the area) since its launch two years ago and 56 have been enrolled in mainstream schools.

This is a remarkable success considering the pressures on these children to earn money for their families, as well as the transient nature of their existence, often moving from place to place to find work.

Education is a lifeline

There are a staggering 51,000 street children in Delhi, but only one-fifth of them have been to school. A further 23% of street children have attended programmes like this one.

Unsurprisingly, the number of children who remain on the street if they are educated to secondary level is less than 0.2%. It is clear that education is a lifeline for these children to build a better life for themselves, but there is so much more to do to bridge the gap in state education.

Street to School is part of Aviva’s international corporate responsibility programme, which raises awareness of this global issue and commits to help half a million children worldwide through training and education.

It’s a great example of a corporate partnership and a truly inspiring first experience of a Save the Children programme in action.

Please help us reach even more children by donating today