Waiting to speak about vaccines at the World Health Assembly 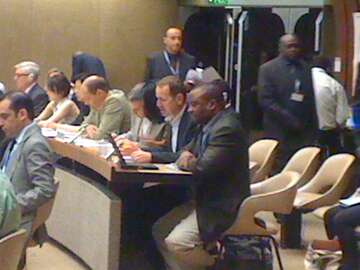 Vaccines are high-profile at this year’s World Health Assembly. With the GAVI Pledging Conference looming and Bill Gates keynote address, the topic is in the front of delegates’ minds. I am sat in the vast circular room where Committee A is meeting, waiting to make an intervention from civil society.

Naturally, civil society observers are only entitled to speak after the official government delegations have spoken, although oddly, we usually speak when it is too late to influence the decision. The topic under discussion is a progress report on the Global Immunisation and Vaccines Strategy (GIVS). There is no overt disagreement on this – no-one is against vaccines of course. In fact, for these health ministry officials, overseeing vaccination programmes is their core business. However, there are important subtle differences emphasised in their speeches. Some countries are stronger than others in their call for the price of vaccines to be driven down. Some countries have more anxiety about the sustainability of vaccines that are introduced with donor money. Some countries want to really emphasise the need to support production by manufacturers from outside Europe and America. Some countries want to question why GAVI support is only available to the poorest countries and are arguing that the criteria could be changed.

What is clear is that there is strong support for GAVI, alongside lots of discussion about building on its success so far and maximising its resources by improving efficiciency. When I get called to speak, I want to mention the need for some other key donors to join the UK government in pledging substantial funds to GAVI. In particular, France, Germany and the United States. But I will also mention the importance of disaggregating data by wealth so that we know whether the poorest children are getting vaccinated. And a very important reminder is that buying vaccines is one small part of the story. Donors need to be reminded that support poor countries to build health systems and employ health workers is vital if vaccines and other health interventions are going to reach the poor.

UPDATE: So many countries wants to speak that the WHA ran out of time today. Apparently finishing this off will be the first discussion tomorrow morning.