Vaccines: 4 hours that will save 4 million lives

Today we passed a milestone in our No Child Born to Die campaign, and it was an overwhelming success.

Leaders from around the world gathered at a summit for the Global Alliance for Vaccines and Immunisation in London. They had to decide whether or not to fill a $3.7 billion funding gap that would provide vaccines for 250 million of the world’s poorest children. This will save 4 million children’s lives – a phenomenal achievement.

Four hours later Andrew Mitchell, the UK’s international development secretary, announced to the world’s amassed media that GAVI, and our campaign to save 4 million lives, had smashed our target reaching a total of $4.34 billion dollars; $600 million more than the target.

Prime Minister David Cameron set the pace of the summit when he announced in his opening speech, that: “In addition to our existing support for GAVI we will contribute £814 million pounds of new funding up to 2015. This will help vaccinate over 80 million children and save 1.4 million lives.”

Through the morning more and more leaders pledged hundreds of millions of dollars. On the day following his global campaign call with usBill Gates seized the moment and announced a contribution from The Bill and Melinda Gates Foundation of $1bn. 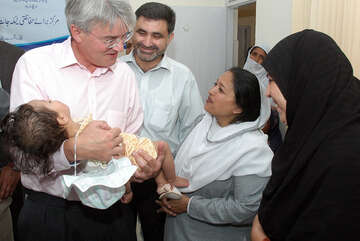 Save the Children’s chief executive Justin Forsyth responded to the great news by saying:

“By pledging more than expected, leaders have given a huge boost to the world’s poorest children.  Millions will now survive common childhood illnesses like pneumonia and diarrhoea, enabling them to grow up and fulfil their potential.

“UK leadership has been critical to this success, but as David Cameron said today, promises to the world’s poorest have to be kept.

“The hard work begins now to keep these historic commitments on track and make sure the vaccines get to the children who need them most.”

This funding is a huge step forward.

We now need to make sure that the funding is spent as best it can be and reaches those children who need support the most.

In today’s press conference Bill Gates said that he ‘thinks of it in terms of equity’ for him it’s incredibly important that the vaccines he and other donors are paying for reach the poorest, most marginalised children in the world.

We also need to ensure that commitments at today’s conference to use GAVI mechanisms to continue to drive down vaccine prices are followed through in order that this vital work continues to get more and more effective. 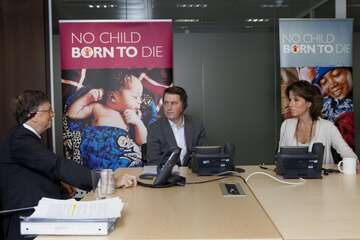 (To listen to our Global Campaign Call shown above click here.)

Finally we need to make sure that the health workers; nurses, vaccine delivery people, doctors and more, are in place to get those vaccines into the children that need it most.

GAVI needs to ensure that at least $600million supports health systems including recruiting, training and retaining those health workers; because vaccines don’t inject themselves.