Tibebu’s testimony: Challenges of being a health worker in Ethiopia

After three hours on the windy roads of Amhara from our office in Dessie, with breathtaking views of lush pastoral plains and mountains, we arrived at Kalela Health Centre.

Save the Children UK is one of the major health partners in Kalela district.

For this reason, it is the referral health centre for the whole district, which has a population of almost 150,000 people.

Five other district health centres, each serving a cluster of kelebe (neighbourhood) health posts within their catchment areas, feed into the Kalela centre.

As a result, the staff at Kalela were desperately in need of more space.

A new unit for women and children

In response, we recently supported the construction of a new reproductive, maternal, newborn and child health unit at Kalela, which means many more patients can be seen every day. 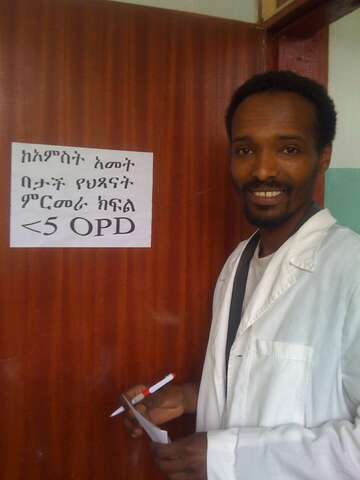 Tibebu Girma, and Sister Adefash Gdaffi — the two senior clinical nurses — kindly showed us around with several other colleagues.

Here’s a picture of Tibebu at the new outpatient clinic for children under the age of five.

We heard of the ongoing challenges they face:

At the health centre, the top three causes of illness in children under five are diarrhoea, parasites and pneumonia.

Yet, the drugs to help treat such conditions are unavailable because of budget constraints.

Unlike vaccines and long-term contraceptives — which are provided directly by international donors free of charge — oral rehydration salts, de-worming pills and antibiotics have to be purchased on the facility’s budget.

Since the Government of Ethiopia’s recent health financing reforms, facilities are responsible for covering the costs of maintenance, drugs and supplies, through raising revenues from charging user fees.

In Kalela, few households can afford these fees. As a result, the income raised is inadequate, and shortages of essential drugs and supplies prevail. Facilities in poorer areas, with fewer paying patients and a higher burden of disease, will suffer more.

A malnourished child is far more vulnerable to disease. In Kalela, malnutrition is endemic, yet there are no therapeutic feeding facilities available.

The second most important challenge is insufficient skills amongst the health workers.

Tibebu was enthusiastic for additional training so that he and his colleagues could provide better quality care.

Safe delivery and the integrated management of childhood illnesses were priority areas.

Transportation was cited as the third major challenge that Tibebu and his colleagues face.

If Kalela had more motorbikes, the health workers at the centre could undertake their essential roles in providing supportive supervision to Health Extension Workers based in the kebele health posts within their cluster, conducting monitoring and evaluation, as well as outreach.

The one ambulance that the health centre has — which was donated by a non-governmental organisation — is insufficient to support the many patients who are referred from across the district.

More concerning is the fact that poor patients cannot afford to pay for the fuel and driver, and are thereby denied access to the ambulance.

The effect on children

Whilst we were at Kalela, a child arrived on a stretcher constructed using scraps of wood and cloth, having been referred from another health centre.

He was carried by two men, with a third holding an umbrella to shade the sick patient from sunlight and rain. They had walked for many hours.

It is because of poverty that this boy was slow to access care.