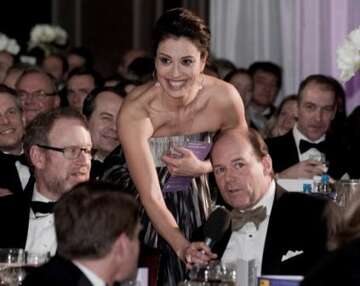 Her Royal Highness The Princess Royal, President of Save the Children, attended the event to present Dr Josef Ackermann, Chairman of the management board and executive committee, Deutsche Bank, with the coveted “Bank of the Year Award” for 2010.

During the evening senior representatives of the world’s leading investment banks pledged money to Save the Children via an interactive charity bidding board.

Deutsche Bank topped the list of contributors with a phenomenal bid of £500,000.

Justin Forsyth, Chief Executive of Save the Children UK, said: “Last night was another amazing evening hosted by Thomson Reuters IFR. Once again, it was fantastic to see the generosity and support for Save the Children. The money raised at last night’s IFR Dinner will save children’s lives in some of the toughest places in the world. It will make a huge difference. Thank you.”

The dinner, held in the Great Room of London’s Grosvenor House Hotel, and attended by more than 1,000 senior investment bankers, was organised by Thomson Reuters IFR.

The IFR event is recognised as the key awards ceremony for global financiers and is Save the Children’s largest single annual fundraiser.

Keith Mullin, Editor-at-Large at Thomson Reuters IFR, said: “The IFR awards dinner was a fabulous occasion that once again caught the imagination of the capital markets industry. Attendance was the highest it’s been since before the global financial crisis and the mood was distinctly upbeat, which hopefully is a harbinger of good things to come. The industry has a number of challenges, but there is a definite sense that the market is more than able to meet them. The £1.4m-plus raised for Save the Children on the night was a tremendous achievement. The funds will go a long way towards bettering the lives of thousands of vulnerable children.”

A full list of the 2010 winners can be viewed at www.ifrawards.com