The wonderful carers of Limpopo 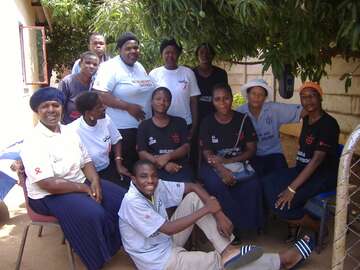 In December I visited the province of Limpopo in South Africa for a programme review. While there I met three groups of home-based carers, they really are some of the most amazing people I have ever met. Since the visit I have been struggling to write a blog that adequately summarises the impression they made. I have not quite succeeded but here goes.

Home-based carers get 90 days’ training; they visit and provide care for those who are chronically sick, often with HIV or tuberculosis in their homes. They visit eight or nine people a day and work five days a week. They encourage people who are sick to take their medication, ensure they have eaten and washed, they listen to their problems, advise them and their families on health issues, and encourage them to seek formal healthcare when they need it. When I asked one group to explain what they did for those they care for, one woman said quite simply “We love them”.

The current system of Home-Based Care appears in some cases to be expecting volunteers to do work that should be the responsibility of the state – for no remuneration. However, where the responsibility for these carers lies is not at all clear. Some are provided with stipends from the government, some from NGOs and some from the government through NGOS. One carer explained that it all depends on if you are registered or not, but she had no idea about how an unregistered carer became registered. In general the carers weren’t sure what the difference was between those who received stipends and those who didn’t. It’s all very confusing and does need to be clarified.

So for now, I promised the home-based carers of the drop-in centre in Messina (pictured above) that I would tell as many people as I could about them. So please, if you’re reading this, tell someone else about the wonderful home-based carers of South Africa, because they really do deserve a whole heap of recognition.